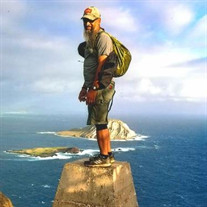 Adam Kahaleloaokaukanaokamehameha Ahai, III of Honolulu passed away Monday, September 30th, 2019 at Straub Hospital at the age of 48. He was born on November 5th, 1970, the son of Kealohilani Ahai and Stephanie Ahai. Adam graduated from the Academy of the Pacific in 1988. In January of 1989 he started working for D & G a company owned by Daryl Fung and Greg Poole. In December 1989 Adam worked for Hustle & Muscle a company owned by Greg Poole until 2014, then David Ahia took over the company and changed it to 919. He worked for David until the day he passed away. Adam was a paddler, artist, “writer”, mountain biker, gun/knife connoisseur, hiker, coach and the most loving husband, son, brother and uncle one could ever ask for. He was a part of many worlds and made an impact in every one of them. Adam will be immensely missed by his Wife-Cindy Ahai, Father-Kealohilani Ahai, Sisters-Kaleo Ho, Renee Fludd and Tesia-Irene Ahai. His cousins David Ahia and Christina Ahia-Trugillo, who he considered siblings and his Aunty Heather Babbette Ahia are also in the “same canoe”. There are countless friends, 4 nephews, 1 grand nephew, 1 Brother-in-law-Hamilton Ho, many other family members and all the athletes that he coached over the years, that survive him and will miss him immensely. Adam was preceded in death by his mother Stephanie Ahai and one of his closest friends Owen Cenal. Visitation will be on Wednesday, October 16th, 2019 at 5:30 pm - 6:30 pm followed by a service. Refreshments to follow the service. Adam’s ashes will be scattered outside Magic Island on October 19th, 2019. Launch time will be at 9:00 am from the Ala Wai

Adam Kahaleloaokaukanaokamehameha Ahai, III of Honolulu passed away Monday, September 30th, 2019 at Straub Hospital at the age of 48. He was born on November 5th, 1970, the son of Kealohilani Ahai and Stephanie Ahai. Adam graduated from the... View Obituary & Service Information

The family of Adam Kahaleloaokaukanaokamehameha Ahai III created this Life Tributes page to make it easy to share your memories.