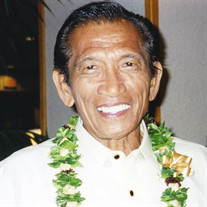 Alfredo Ignacio “Aciong” Ventura Baptista Alfredo Ignacio Ventura Baptista, energetic and hard working husband, father, and grandfather, passed away on Thursday, April 2, 2020 at Queen’s Medical Center in Honolulu from complications of pancreatic cancer and chronic obstructive pulmonary disease. He went very peacefully, with his wife and daughter holding his hands and his wife serenading him. He was 84 years old. “Aciong” – as he was affectionately known by many – was born on October 23, 1935 in Barangay 50, Buttong, in Laoag City, Ilocos Norte in the Philippines, the first of five children of Mateo Pascua Baptista and Segundina Asuncion Ventura Baptista. He attended Buttong Elementary School and Northwestern University High School in Laoag, and he received a Bachelor of Science degree in Electrical Engineering from National University in Manila. In April 1962 he married Andrea Simeon from San Mateo, Isabela, Philippines. He worked as an electrical engineer at Fort Aguinaldo in the Philippines and as a rigger with Page Communications Engineers in Vietnam during the war. In March 1968 he and Andrea arrived together in Honolulu, Hawaii aboard the passenger ship President Cleveland to build a new life in America. Later that year, they had their first and only child, a daughter, Geri Ann. Alfredo worked for 26 years as a journeyman electrician and was a long-time union member of the International Brotherhood of Electrical Workers. He was always proud to point out the hotels and buildings he worked on on O’ahu, Kaua’i, Maui, and the Big Island during the construction boom of the 1960s, 70s, and 80s. He never stopped working, even after his official retirement in 1994. In 1995, at age 60, he single-handedly built by hand, block by block, tile by tile, a beautiful house in Kalihi Valley where he and Andrea enjoyed life together for the last 25 years. Even up until his final weeks of life, he continued to use his sharp mind and busy hands to help others enjoy their own homes by helping friends and family with their whole house electrical needs, maintaining his various rental properties, repairing large home appliances, and installing modern automatic residential gates. Aside from his strong unwavering work ethic, Alfredo was also endeared for his youthful, adventurous spirit. He was often seen on his moped cruising all over the island of O’ahu until he was 81 years old! He and his wife enjoyed traveling the world together – from Europe and Asia, to Australia and New Zealand, and across the US mainland and Canada. Most recently they enjoyed a cruise to Thailand, Singapore, Indonesia, and Malaysia in December 2019, followed by a final visit to the Philippines and his birthplace in Laoag in February 2020. Alfredo is now reunited with his loved ones who preceded him in death – his father Mateo, mother Segundina, brother Constantino, and sisters Benilda, Erlinda Salvador, and Felina Higa. He is survived by his wife of 58 years Andrea, his only child Geri Ann (married to Jason Allan), and his three grandsons Carter, Jace, and Mateo who he loved very, very deeply. A celebration of life will be held at a future date.

The family of Alfredo Ignacio Ventura Baptista created this Life Tributes page to make it easy to share your memories.