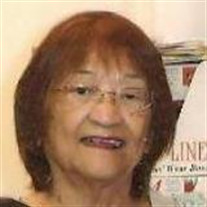 90, Alice Balabala Bailey, of (Aliamanu) Honolulu, Hawaii, passed away on Tuesday, August 28, 2018 in Springfield, Missouri. She was born on the beautiful island of Maui, in Wailuku to her parents, Regina (Diego) and Apolinario Balabala , on... View Obituary & Service Information

The family of Alice Balabala Bailey created this Life Tributes page to make it easy to share your memories.