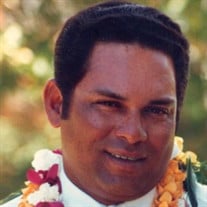 Blaise Moses Lopez Sr., 71, slipped through the veil on the morning of May 22, 2021 at Sharp Medical Center in Chula Vista, California. Even in these difficult times Blaise was surrounded and cared for by family and friends during his last moments. He was born to parents Ignatius Peter Lopez Sr. and Mary Ku’uleihoku Akim on February 3rd, 1950 in Honolulu, Hawaii and grew up in Waimanalo. He graduated from Kailua High School in 1968. In his younger years, Blaise enjoyed playing sports. He loved basketball, baseball, football, and surfing. He also had a passion for animals. At a young age he learned how to properly care for many types of animals on his farm which would greatly benefit him in his future career. Following high school, Blaise decided to enter the draft into the United States Navy in 1969. He served two years of active duty in the Vietnam War where he was stationed in Subic Bay, Philippines. He then served an additional 4 years in the Navy reserve. Blaise worked as a Marine Biologist Technician for 49 years in the NIWC of the Pacific until the time of his death. He was nicknamed “The Legend” among his peers. He was highly respected and relied upon during his illustrious career. Blaise received numerous awards for his high character and quality of work while performing his duties with various marine mammals. He was best known for his persistence. His motto was, “If you’re going to do something, might as well do it right.” He never left a job undone. He really enjoyed following Hawaii’s high school sports specifically basketball, baseball, and football. However, nothing brought him more happiness than watching his own children and grandchildren compete. He was an excellent coach and taught most of his posterity how to play basketball, baseball, football, racquetball, volleyball, boxing, and wrestling. It would have been rare that he would ever miss an event or game. In most cases he would arrive early, before practices ended, just to observe how his kids were acting when he was not around. He was immensely proud to be a Lopez. He frequently told his kids that the choices they made reflected on his name. Blaise met Jimmienette Leialoha (Kaonohi) Lopez in 1966. They were married on August 10, 1974 in Waimanalo Hawaii. Together they raised 6 children: Blaise (Moke), Valorah (Pohai) Lopez-Griggs, Kyle (Kalo), Brandon (Kauwila), Charles (Kale), and Trevor (Kaimi). His posterity would grow to include 20 grandchildren and 4 great-grandchildren. Blaise was a faithful member of The Church of Jesus Christ of Latter-day Saints. He was baptized a member in May 1977. Soon after, he was sealed to his beautiful wife, Jimmienette, for all time and eternity in the Laie Hawaii Temple on August 5, 1978. He and his wife assisted patrons of the San Diego Temple as temple workers. They both enjoyed their time serving the Saints and the Lord. Along with this devoted service, his greatest joy was to visit the temple with his family and friends. Some of his fondest memories were taking his 6 young children to the temple and roaming the grounds. Blaise is survived by Jimmienette Lopez, his wife, his six children: Blaise Lopez Jr., son, Valorah Lopez-Griggs, daughter, Kyle, son, Brandon, son, Charles, son, and Trevor, son. He is also survived by his sister Josephine Alameda. He was preceded in death by Ignatius Peter Lopez Sr., father, Mary Ku’uleihoku Akim, Mother, and Ignatius Peter Lopez Jr., brother. The family will be hosting a memorial service in his honor on June 12, 2021 from 2-5 pm at the Chula Vista, CA. LDS Stake Center. They will also have a viewing and services on July 20, 2021 from 9 am-noon at the Waimanalo, HI. LDS chapel. Following the services, burial will take place at the Hawaii State Veterans Cemetery, Kaneohe, Hawaii at 1 pm. Blaise’s family would like to express their love to all their family and friends who have offered continual thoughts and prayers on their behalf. They are comforted at this time through their knowledge of Heavenly Fathers great plan of happiness. They are sad to be separated from him for a season but are reassured they will see him again because families are forever. The world has lost a great man, but Heavenly Father has received another warrior to continue his work. Oh, how great will be our joy when we return home to our Heavenly Father’s Kingdom and are reunited with our dad.

Blaise Moses Lopez Sr., 71, slipped through the veil on the morning of May 22, 2021 at Sharp Medical Center in Chula Vista, California. Even in these difficult times Blaise was surrounded and cared for by family and friends during his last moments. He... View Obituary & Service Information

The family of Blaise Moses Lopez Sr. created this Life Tributes page to make it easy to share your memories.

Blaise Moses Lopez Sr., 71, slipped through the veil on the morning...