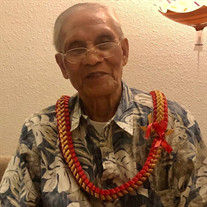 CAMILO LAPENA PASION, 81 years old, passed away at home on April 22, 2020. Born in San Roque, Santiago, Ilocos Sur, Philippines to Cipriano Pasion and Marcelina Lapena Pasion, both deceased. Survived by wife, Ceferina Bonilla Valdez Pasion; Children: Genevieve Valdez Pasion (Deceased), Albert Valdez (Kim Ascano) Pasion and Patricia V. Pasion (Baret) Morishige. Grandchildren: Abigail Marie Pasion, Theresa Anne Pasion, Zayden John Morishige, Ezekiel Morishige and Kenzie Genevieve Morishige. Siblings: Gaudencio (Flora /Betty) Pasion (Deceased), Andronico (Mila) Pasion (Deceased), Estelita Pasion, Andres (Nena) Pasion (Deceased), Eddie Luis (Ma. Loretto) Pasion (Deceased), Romulo (Beth) Pasion, and lots of nieces, nephews, Grand and Great-grand nieces and nephews as well. Camilo L. Pasion migrated to Hawaii in September, 1969 thru the petition of their eldest brother, the late Gaudencio Pasion. He settled on a job at the Royal Hawaiian Hotel as a Utility Man and worked all the way until he retired in 2001 after 31 yrs. of dedicated service. Besides his full time job, he did moonlighting at some restaurants like The Hub (Alexander Bldg.) on Bishop Street, Spenceclift restaurants and at The Fisherman’s Wharf until he retired. It was at the Royal Hawaiian Hotel where he met his beloved wife, former Ceferina Bonilla Valdez, got married in March of 1974 and blessed with three lovely children: Genevieve, (preceded him in death in 2010), Albert, then Tricia, after nine years. He was a man of few words, lived a happy and simple life and worked so hard for the benefit of their three children. He was a very patient, loving and caring Husband and Father who never laid a hand on anyone in his Family. We may have ups and downs but we weather it out before the sun goes down. No vice at all (any woman would long for), so dedicated to his job that he could barely take a trip outside of this Rock. Only once did we have Family vacation to Los Angeles and Las Vegas; to New York to visit his siblings and to Vancouver, B.C. to visit relatives. Highlight of his trips was joining the Marianne Pilgrimage to Portugal, Spain, France, Switzerland, Italy and Medjugorje in 2006 which he enjoyed so much. Despite all these, he never desired to go back home, despite my encouragement; only once, when my Mother-in-law passed away in 1977. Aloof as he was, he was always willing to join me in attending the DCFCC convention, to which we became members, especially to the outer Islands; attend community and church functions and activities and all the school presentations by our Grandchildren, but most especially, attending the Sunday Eucharistic celebrations. After his retirement, he became the house-taker as I was still working then. He did gardening and simple home-improvements. I joined him after my retirement in 2008 but life came tougher when our eldest (Genevieve) got sick and we lost her in 2010. Our first Twin Grandchildren arrived right after who became our instant joy and consolations in the midst of our grief. Few years later, Tricia, also got married and had children and so more Family celebrations came along the way. When opportunities allow it, we would sneak to the movie theaters just to relax and unwind. Camilo really lived his life the way he wanted to be and am so grateful to God for that. He will deeply be missed. Private Funeral and Burial Services were held on May 4, 2020 officiated by Rev. Fr. Raymond Ellorin at the Valley of the Temples. Memorial Mass Service is scheduled for July 18, 2020 at the Co-Cathedral of Saint Theresa of the Child Jesus with Rev. Fr. Manuel Hewe, to celebrate the Mass.

The family of Camilo Lapena Pasion created this Life Tributes page to make it easy to share your memories.