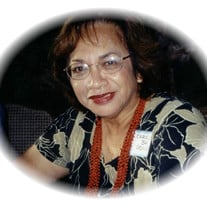 Caroline Kaleionalani Kauahikaua Ponce was born in Waialua, Hawaii on July 26, 1936 to William Jr. and Lydia Kauahikaua. She died on January 22, 2019 in Honolulu, Hawaii. Caroline grew up on the island of Oahu and attended Kamehameha Schools and graduated in 1954. After high school, she joined the Air Force where she was stationed at Eglin AFB, FL and met Ernest Rosco Ponce. They were married there in 1956. They also lived at Itazuke AFB, Japan and Myrtle Beach AFB, SC. In 1965, while Ernest served in Vietnam, Caroline moved back to Honolulu, HI with her two children before relocating to Cannon AFB, Clovis, NM in 1967. For 30 years, Caroline and Ernie established roots in Clovis, NM raising their kids and grandchildren in a community that would always be their home away from home. Caroline was the Contracting Officer at Cannon AFB and contracted the expansion of Whispering Winds Golf Course as well as other major projects during that time. In 1997, Caroline and Ernest moved back to HI where Caroline worked at Hickam AFB as the Chief of Contracting where she was responsible for all base contract work. Caroline worked as a Department of Defense Civil Service employee for over 52 years retiring in 2014 on her 78th birthday. Caroline served as the class representative for the Kamehameha Schools Class of 1954 and planned annual reunions, birthday celebrations, and trips (especially to Las Vegas, NV). She was an avid traveler and always made her own path. She also enjoyed making leis, bowling and was a fan of football (the Dallas Cowboys), but most of all, she loved her ohana and spending time with them. Survivors include one daughter, Ernie Kos and husband, Ron, of Clovis; one son, Sonny Ponce and wife Rose of Clovis; seven grandchildren, Ryan Kos, Misty and Tim Bertrand, Jason and Bretni Kos, all of Clovis and Christen and Jeremy Ray of Englewood, CO; six great grand children, Jayden Kos, Max Whitaker, Piper Whitaker, Keller Kos, Kimber Kos, all of Clovis and Olen Ray of Englewood, CO; one brother and sister-in-law, William and Kaleo Kauahikaua and her beloved niece Chendra Kauahikaua of Honolulu, HI and numerous other nieces, nephews, and friends. A local memorial service was held at the Clovis Civic Center on Wednesday, January 30. The funeral service will be held at a later date at the Bishop Memorial Chapel at Kamehameha Schools – Kapalama Campus, Honolulu, HI. Graveside services will be at Hawaii State Veterans Cemetery in Kaneohe, HI with full military honors. Pallbearers will be grandsons and nephews. Honorary pallbearers will be her Kamehameha School Class of 1954 classmates.

Caroline Kaleionalani Kauahikaua Ponce was born in Waialua, Hawaii on July 26, 1936 to William Jr. and Lydia Kauahikaua. She died on January 22, 2019 in Honolulu, Hawaii. Caroline grew up on the island of Oahu and attended Kamehameha Schools... View Obituary & Service Information

The family of Caroline Kaleionalani Ponce created this Life Tributes page to make it easy to share your memories.