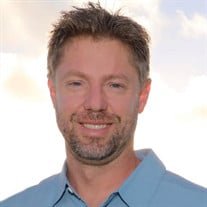 It is with extremely heavy hearts that we share with you the passing of Christopher Jon Peterson. Chris, a loving husband, father, son, and friend, passed away on Tuesday, January 19, 2021, at the age of 41. Chris was known for his infectious smile, carefree attitude, and his HUGE heart. He was willing to give anyone the shirt off his back––even a homeless man his favorite hat and slippers. Chris had such a positive energy that it, in turn, energized others around him. He had the gift of instantly making you feel at ease, as if you were a dear friend. Chris and his twin brother (Matt) were born on March 5, 1979 (at the exact same time!) in St. Paul, MN to Jon and Sharon (Warboys) Peterson. They lived in St. Paul for a few years before moving to Colorado, where they lived until the age of eight. They then moved to Seattle where Chris discovered his love for the ocean and participated in numerous extracurricular activities including competitive gymnastics. While attending college, he met the love of his life, Niccole (Lee) Peterson. After graduation, Chris and Niccole relocated to Oʻahu, Hawaiʻi. They were married on July, 8, 2006, in a fantastic celebration that few can remember the details of, thanks to some heavy handed pouring of drinks! He briefly worked in car sales prior to joining the Navy in January of 2007. That was a big year for Chris because, not only did he join the Navy, that is the year he became a daddy. Victoria, was born on July 30th. Being a husband and father was Chris’ ultimate pride and joy. Audrey, Niccole and Chris’ second daughter, was born on March 21, 2012 and completed their family. Chris was a man who many would say was a “Jack of all Trades'' and a “Mr.Fix-It.” There was no job that he wouldn’t tackle, and he always gave it his 100%. From his time in the Navy as an EOD member, to his brief stint with the Honolulu Police Department, Chris always had a smile on his face and worked hard to provide for his family. He eventually found his work home at the Pearl Harbor Shipyard as a ShipFitter. He would put in many hours of overtime and still have a cheerful disposition. Chris was adored and loved by all who knew him. A funeral service celebrating Chris’ life will be held on Saturday, February 27, 2021, at Saint Anthony of Padua Church in Kailua at 10am. On Sunday, February 28, 2021, there will be a paddle out at Kailua Beach with close family and friends. In lieu of flowers, please consider donating to either the EOD Warrior Foundation (https://eodwarriorfoundation.org) or the Navy Special Operations Foundation (https://www.nsof.org). Chris is survived by his wife, Niccole, two daughters, Victoria and Audrey, his parents Jon (and his partner Claudia) and Sharon, his twin brother, Matthew, and countless extended family and friends. He wouldn’t want us to forget to include his canine bestie, Draco, either! Please continue to keep Niccole and their girls in your thoughts and prayers. A Go Fund Me account has been created for the family that may be contributed to.

It is with extremely heavy hearts that we share with you the passing of Christopher Jon Peterson. Chris, a loving husband, father, son, and friend, passed away on Tuesday, January 19, 2021, at the age of 41. Chris was known for his infectious... View Obituary & Service Information

The family of Christopher Jon Peterson created this Life Tributes page to make it easy to share your memories.

It is with extremely heavy hearts that we share with you the...