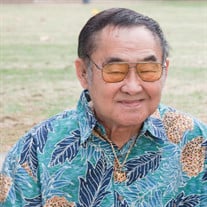 Clifford Shigeru Okamoto was born August 7, 1941 in Honolulu, Hawaii to Charles and Phyllis Okamoto. Cliff/Kip was the 3rd oldest of six children. Cliff started working at a young age with newspaper routes and various maintenance jobs all around the island. When he wasn’t working, he was fishing, riding motorcycles or getting into mischief with his best friend, Lee Donahue. He graduated McKinley High School in 1960, and shortly after was married and had a son, Nathan, in 1965. Unfortunately, the young couple parted ways and in 1971, Cliff decided to pursue a fresh start in California. Cliff continued to work maintenance/masonry jobs while living in Monterey Park with his Uncle Toshi and Aunty Misaye Tanabe. He leaned on family friend, Leo Shinohara, to get him acquainted to the “mainland”. Leo took Cliff to house parties and other events, but the most important was the house party where Cliff met Bea. They dated and then married in 1974. Cliff, began working for LA City Department of Public Works Bureau of Street Services in 1975, the same year their first daughter, Sandra, was born. Around this time Cliff quit smoking and learned that he was diabetic. In 1978, they purchased a “fixer-upper” house in Pomona where Cliff’s craftsmanship really paid off as it eventually became their “forever” home. Cliff continued working and commuting to his jobs with LA City that later included the LA Fire Department and Department of Park and Recreation. In 1982, Cliff joined the LA City Harbor Department as a Masonry Finisher. He stayed with the Harbor department until 2006 when he retired and started his dialysis treatments. In 2008, he became legally blind was diagnosed with Parkinson’s in 2017. Cliff had numerous interest such as hunting, carpentry, locksmith, golf, Tahitian drumming and collecting Delft dishware. His most favorite, was going to Vegas to eat all the ono kine food and throw dice on the craps table! Cliff and Bea had an endless love and were inseparable even at their passing, one week apart on Aloha Friday’s. They are celebrating their 46th wedding anniversary in heaven on Oct 19th. Their grandchildren, Malia and Noah were their pride and joy-close second their Son in law, Eric and two daughters, Sandra and Sue. Order of Events Welcome Eulogy Nephew Jim Ogden Newphew David Park Hula Tribute- "Pua Hone" Daughters Sandra and Sue Grandchildren Noah and Malia Words of Remembrance Video Remembrance Closing Prayer Son in Law Eric Mahalo to everyone for all your love and Support

Clifford Shigeru Okamoto was born August 7, 1941 in Honolulu, Hawaii to Charles and Phyllis Okamoto. Cliff/Kip was the 3rd oldest of six children. Cliff started working at a young age with newspaper routes and various maintenance jobs all around... View Obituary & Service Information

The family of Clifford Shigeru Okamoto created this Life Tributes page to make it easy to share your memories.