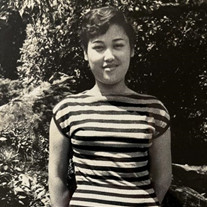 Esther Chiang Cheh November 20, 1934 – January 10, 2022 Esther Cheh (née Chiang Feng-Chih), 87, mother of two and widow of Jen Chung Cheh (1916–99), died of natural causes at Maunalani Nursing and Rehabilitation Center in Honolulu on Monday morning, January 10, 2022. Her caretakers reported that she went peacefully while taking a nap after her usual breakfast. Esther was born on November 20, 1934, in the city of Bengbu, Anhui Province, Republic of China, to Chiang Tung-Chuan and Chiang Yu-Hua. She was the second youngest of six children who survived to adulthood. Esther’s childhood was scarred by the Second Sino-Japanese War, during which she recalled running with her siblings to escape Japanese bombs. All three of her older brothers were inspired to enlist in the Nationalist Air Force and one of them, Chiang Tien-En, went on to become a hero in the concurrent Chinese Civil War. In 1949, however, Mao Zedong’s victory in that war forced the Nationalist government to retreat to Taiwan. With the help of Esther’s brothers, the Chiang family fled to the island stronghold together by cargo plane. The oldest sister, who was already married, stayed behind, and she would not be reunited with the rest of the family until decades later. After graduating from Ping Tung Girls High School in southern Taiwan, Esther taught herself to type and secured a job as a secretary at the American Military Assistance Advisory Group (MAAG) based in the capital city of Taipei. She worked there for 13 years and always spoke fondly of her bosses, who were kind and supportive. She also loved this period of her life in general, which was filled with fun social activities with her peers. Esther finally left her job, and Taiwan, when she accepted a marriage proposal from Jen Chung Cheh, who was introduced to her by a mutual friend. Jen, for whom this was his second marriage, had already established a home for himself in Honolulu, Hawaii. Following their wedding in Taipei, Jen brought Esther to Honolulu in July 1965, where they began a new life together. The Chehs had two daughters: Carol, born in 1966, and Tina, born in 1969. Jen, who had been a Chinese/English translator for the US Army, found work first as a counselor at Waiahole Elementary School, and later as a CPA with his own practice. Esther underwent some vocational training and worked as a keypunch operator, a jewelry store clerk, and later as a realtor. Settling into Honolulu life, Esther was lonely at first and missed her family and friends back in Taiwan. Slowly over time however, she built a wide and spirited network of friends in Hawaii, many of whom were fellow transplants from Taiwan. She and Jen also worked to bring Esther’s parents and two of her brothers to Honolulu, helping them find housing and go through the naturalization process to become US citizens. Esther was known to her friends and family as someone who was very generous with her time and assistance. In addition to helping her parents and brothers with immigration, she also acted as her mother’s sole caretaker when the latter became elderly and infirm. Thanks to Esther’s loving care, Grandma Chiang lived to be 102 years old, passing away in 2001, her life having touched three different centuries. Esther was also quick to help her friends with everything from shopping errands to managing their properties while they were away. She jokingly referred to herself as a “chauffeur” because of how frequently she gave people rides. Esther was also appreciated for her wit and humor, as she often made her friends laugh. In her later years, Esther preferred to live a quieter life at home. As her health deteriorated, the decision was made to place her in the care of Maunalani Nursing and Rehabilitation Center, which she had greatly enjoyed during a prescribed rehab stay several years earlier. Esther spent the last two years of her life charming the Maunalani staff, who adored her positive attitude, and avidly attending all of the daily activities for residents. She especially loved playing bingo, singing karaoke, coloring, watching concerts, relaxing on the patio, and chatting with other residents. She displayed the stuffed animals she won in bingo with pride. Esther is survived by her daughters Carol Cheh and Tina Cheh, her sister Angela Chang, and numerous nieces and nephews. A private graveside service was held at Valley of the Temples on February 3, 2022. Esther now rests in peace in the Chinese Ocean View section with her husband, parents, and two brothers.

The family of Esther Chiang Cheh created this Life Tributes page to make it easy to share your memories.