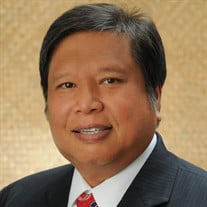 Eusebio M Paeste, 66, well known as Butch, passed away on the morning of May 3, 2022. He was born on August 14, 1955 in Laoac, Pangasinan, Philippines to his father Rosalo Paeste Sr. and mother Lucina Molina. His family migrated to Guam when he was 7 years old. Later he started at John F Kennedy High school then moved to Hawaii in 1969 and graduated from Kaimuki High School. He attended Kapiolani Community College where he met his wife Dionisia Villar, also well known as Gina. He went on and graduated from University of Hawaii at Manoa with his Bachelor’s in Business Administration. His siblings are, his sister Rose and her husband Jose Pineda. His sister, the late Josie and her husband Elipidio Gatmen. His brother Dr. Rosalo and his wife Jeanette Paeste. His youngest brother Rosco Paeste. He is survived by his wife Gina Paeste and their children. Daughter Vanessa Marie, her husband Eric Butler, and their sons Cameron Alexander and Kimo Francis. Daughter Valerie Christine, her husband Marc, and their daughters Ezri Joline and Mayari Serei. Daughter Veronica Leigh and her husband Nathanael Baird. Foster son Corey Smith. The family spend a few years in California then moved back to Hawaii in 1991. Butch worked at several mortgage companies then retired to take care of their foster children Corey Smith and the lates Mavis and Mau Tafia, full time. His hobbies included golf, bowling, cooking, and ballroom dancing. He gave much of his time to their parish St. Joseph Church in Waipahu, Hawaii, and being a part of the Knights of Columbus. He also gave a lot of his time to babysit his granddaughters. He was a kind and doting husband to his wife Gina, an amazing father to their daughters and a wonderful “Papang” to their grandchildren whom he adored. His wake service will be at the Valley of the Temples in Kaneohe on June 30, 2022. Public viewing 5pm; service starts at 6pm. His funeral mass will be at St. Joseph Church in Waipahu on July 1, 2022. Public viewing 9:30am; service starts at 10am. Burial to follow at Valley of the Temples in Kaneohe at 12:00pm.

Eusebio M Paeste, 66, well known as Butch, passed away on the morning of May 3, 2022. He was born on August 14, 1955 in Laoac, Pangasinan, Philippines to his father Rosalo Paeste Sr. and mother Lucina Molina. His family migrated to Guam when... View Obituary & Service Information

The family of Eusebio Molina Paeste created this Life Tributes page to make it easy to share your memories.

Eusebio M Paeste, 66, well known as Butch, passed away on the...