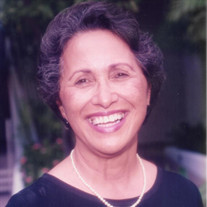 87 of Makakilo, beloved Wife, Mother, Grandmother, Great Grandmother and Great Great Grandmother, passed away on December 12, 2019. The third of five children born to Charles and Margaret Wills in Watertown, Halawa Ahupaa, Evelyn or “Evie” as she was called by family and friends or “Aunty Cookie” by nieces and nephews, will forever be remembered for her love of God Our Father, her Ohana, and of music. Evie grew up in Puunui attended Sacred Hearts Convent and Academy and graduated in 1950. She attended the University of Hawaii for a year before leaving to join the Navy as a Hospital Corspman based in Camp Pendleton, CA. While there she would meet and nurse back to health the love of her life, Sergeant Robert “Bob” Faurot, USMC. They would marry in May 1955 and welcome their first of eight children a year later. Evie would leave the Navy after one hitch and return to Hawaii in 1957 with Bob to raise their family. She took a job working with the Hawaii Visitors Bureau and in the process would meet her best friend Mapuana (Baldwin) Schneider with who she would share a close, life-long bond. Bob’s career with the Marines would take him to bases on the East and West coasts and tours in Vietnam with Evie looking after their ever growing family. They eventually settled in Makakilo after Bob’s retirement and Evie would go back to school, earn her Associates Degree, and begin her career in the Department of Education as an Educational Assistant. She taught in various elementary schools throughout Ewa Beach, Makakilo, and Waipahu for over 20 yrs and retired in 1995. Born and raised in the Catholic Church, Evie served in various capacities from CCD teacher, to Eucharistic Minister, to Lector, but her true calling was singing in and eventually leading the Choir. Always in pursuit of ways to serve her Lord, Evie would volunteer her time and resources to various Catholic Charities and was also dedicated Cursillo member. Evie was preceded in death by her husband Bob, grandson Dustin, sisters Winifred and Winona, and brother Albert. She is survived by her children; Pam Scharsch (John), Kaiulani Pyper (Stewart), Kekoa (Melody), Jon (Nalei), Warren (Hanako), Chris (Barb), Mary Pescaia (Damon), Eric (Ipo); 30 grandchildren, 22 great grandchildren, and 1 great great grandchild. Evie’s life will be celebrated on Friday, January 3, 2020 at St. Judes Catholic Church in Makakilo. Visitation 10:00 a.m.; Mass 11:00 a.m.; Burial 2:00 p.m. Hawaii State Veterans Cemetery, Kaneohe. In lieu of flowers, please consider making a donation to the Alzheimer’s Association in her name at https://act.alz.org/.

The family of Evelyn Mae Faurot created this Life Tributes page to make it easy to share your memories.