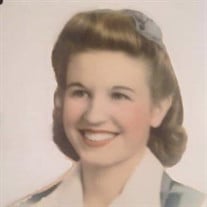 Frances T. Maier, 1921 ̶ 2022, passed on peacefully in her sleep on Memorial Day in her beloved Hawaii. She lived a long, robust, creative life. Born in Lincoln, Nebraska, two years after the 19th Amendment granted women's right to vote, Fran's life exemplified the transformation of contemporary women into accomplished, well-rounded, independent individuals. A child of the "Roaring '20s" and the Depression, she was no stranger to life's ups and downs, but always made the best of it. Among the myriad changes during her life, Fran's boyfriend was killed on the USS Oklahoma during the attack on Pearl Harbor. Years later she married Don Maier, with whom she raised four boys. In 1978 Fran moved to Hawaii and opened an art gallery. She was certified by the International Society of Appraisers as a licensed art appraiser. Later in life, she found success as a painter. She also became an accomplished pianist. Her keen aesthetic sense helped to define her. She shared a special bond over music and art with her daughter-in-law Mihoko Maier. Two days before her death, Fran took Mihoko’s hand and said, "I am so happy to have you as my daughter-in-law." Mihoko was touched by her kindness and Fran by hers. Survivors include three sons, Christopher, Kimbrough, and Steven (her youngest son, Dana, preceded her in death); daughters-in-law Mary and Mihoko; grandchildren (who called her Guppie or YaYa) Emily, Laurence, Scott, Sara, Jesse, and Alex; and great-grandchildren Mia and Tate. A celebration of her life will be held in October at the place where she raised her family, Portuguese Bend, California. Rest in Peace.

The family of Frances Trailer Maier created this Life Tributes page to make it easy to share your memories.