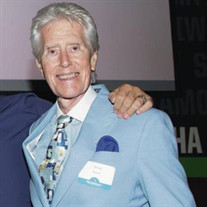 In Honolulu, where almost all business outside of a courtroom is conducted in shirtsleeves, Gregg Mueller was known as the man who always wore suits. A longtime fixture in Hawaii’s broadcasting industry, Mueller wore suits to work, when attending social events and while participating in the activities of the Honolulu Japanese Chamber of Commerce, an organization he joined in 1977, making history when he became its first — and only — Caucasian president in 2003. The man who always wore suits died Tuesday. He was 79. For the past 15 years, Mueller worked in sales for iHeartMedia. Chuck Cotton, president of iHeartMedia Honolulu, said Mueller was “the best of us. He represented a generation of broadcasters who knew how to sell, serve, lead and treat people with respect and kindness wherever he was. I was honored to know him.” Chris Leonard, president and general manager of Hilo-based New West Broadcasting, recalled Mueller as “a strong advocate for the broadcast industry and a friend to all who knew him. He could light up the room with his big, booming voice, larger-than-life personality and he was always the best-dressed in the room — any room.” Wayne Ishihara, president and CEO of the Honolulu Japanese Chamber of Commerce, mentioned Mueller’s “involvement as a volunteer and a mentor for our younger members.” “He always was a gentlemen and impressed everyone with his coat and tie, which he wore every day as his alohawear. He was also very active with the Honolulu Hiroshima Kenjin Kai and annually participated with their food booth at the Ohana Festival organized by the Japanese Cultural Center of Hawaii.” “Everything was Japanese to him,” said Bozu Anama, who’d met Mueller through the chamber. “He was a true ‘Japanese haole,’ a wonderful man and friend.” Friends and media colleagues remembered Mueller fondly on Facebook. Former TV journalist Jill Kuramoto described him as “in more ways than one more Japanese than me.” Former Honolulu Star-Advertiser writer Erika Engle mentioned that Mueller’s interest in Japanese culture included making Japanese-style enameled cuff links. “He was a regular at the twice-a-year workshops led by Kazuko Inomata, who came from Osaka. He made mini works of art to wear on his French-cuffed dress shirts,” Engle said. Mueller made a personal commitment to the Hawaii broadcast industry with his years of service on the board of the Hawaii Association of Broadcasting. He also served as chairman of the association’s advocacy and public relations committee and represented the industry on both the local and national level. Chip Davey was an established sportscaster on KORL 65 when Mueller was hired as a sales representative in the mid-1970s. “Gregg was neat, professional, the consummate salesman and just an all-around good guy,” Davey said in a Facebook post. “A station in turmoil does not sell ads well, but he did. He went on to better things.” Former colleague Stephen Fuchs remembered “the offbeat promotions” he and Mueller created at KIKU, Honolulu’s Japanese- language television station. These included a “Miss Killer Tomato” contest to promote a broadcast of the 1978 horror-film parody “Attack of the Killer Tomatoes,” and the “Mountain of Rice” and “Sea of Saimin” contests. “When the Voltron team came to town (for a promotional appearance), we got so many kids to the malls that the crush of small bodies threatened to break store windows — something we never expected,” Fuchs said in an email. Mueller eventually became KIKU’s general manager before moving from television to radio. “Everybody in radio knew Gregg, he always had a classy touch,” KOOL 107.9 radio host Bart DaSilva said via Facebook. KOOL 107.9 deejay James Coles hailed him as “one of the greats, a super cool cat” in a social media post. Neighbor and friend Daren Kimura revealed another side of Mueller’s involvement in serving the community. “I would see him almost every weekend doing yard work, sweeping the street and picking up after the massive hee tree in his front yard. He used to crack that I could come and make lei from the tree anytime as long as I helped him clean the leaves and rubbish.” “In an era of designer aloha shirts, Gregg wore gorgeous suits and ties,” said longtime friend John Hart. “When you look up ‘class’ in the dictionary, it should direct you to Gregg.” Mueller is survived by his sons, Garrett and Erik, and daughter, Anne Mueller Stoecker, grandsons, Patrick and Kyle McCue. Memorial plans are pending.

In Honolulu, where almost all business outside of a courtroom is conducted in shirtsleeves, Gregg Mueller was known as the man who always wore suits. A longtime fixture in Hawaii&#8217;s broadcasting industry, Mueller wore suits to work, when... View Obituary & Service Information

The family of Gregg Edward Mueller created this Life Tributes page to make it easy to share your memories.

In Honolulu, where almost all business outside of a courtroom...