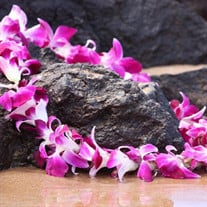 Dr. Herbert (Herb) Takashi Miyata was born on February 19, 1939 and died peacefully in his home surrounded by his loving family on April 9, 2022. He was 83 years old. Herb was born on Oahu and lived in various locations on the island including Waialua, Aiea, Ewa Beach, and Mililani. He graduated as class valedictorian from Waialua High School in 1957. Herb then moved to the East Coast, where he completed both his undergraduate and Doctor of Dental Surgery degrees at Howard University in Washington D.C. Herb enlisted in the United States Army in 1965 and completed Medic Field Service School at the Brooke Army Medical Center at Fort Sam Houston in Texas. He proudly served as a Captain in the Dental Corps and was stationed in Okinawa, Japan, completing his service in 1968. Herb returned to Oahu and began a thriving dental practice in the early 1970s. He met and married the love of his life, Carol Dianne West, in 1973, and together, they devotedly raised three sons. Herb and Carol became successful business owners of The Giving Tree Christian Bookstores with locations in Pearl Ridge, Pearl Kai, Kaneohe, and Pearl Highlands. Herb will be remembered as a committed family man whose life was guided by love and faith. Herb is survived by his wife, Carol Miyata of Mililani; sons, Shawn (Michelle) Miyata of Mililani, Kevin (Leonani) Miyata of Kapolei, and Eric Miyata of Manoa; sisters, Cecilia Okamoto of Pearl City and Marian (Warren) Sugimura of Union City, CA; and six grandchildren, Jonah, Matthew, Elias, Adam, Peka, and Nani. He was preceeded in death by his parents, Masayo and Takaichi Miyata; his brother Dr. Thomas Miyata of St. Joseph, Michigan; and his brother-in-law, Jitsuo Okamoto of Pearl City. A memorial service will be held on May 4, 2022 at 10:15am at Valley of the Temple; a reception will follow the memorial service. In lieu of flowers, the family requests those who wish to express sympathy to consider making a donation to Beyond the 4 Walls Christian Ministry.

Dr. Herbert (Herb) Takashi Miyata was born on February 19, 1939 and died peacefully in his home surrounded by his loving family on April 9, 2022. He was 83 years old. Herb was born on Oahu and lived in various locations on the island including... View Obituary & Service Information

The family of Herbert Takashi Miyata created this Life Tributes page to make it easy to share your memories.