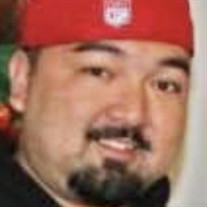 On April 20, 1985, God gifted Pureza and Gene Aluyen, a beautiful baby boy. Born in Honolulu, Hawaii at 8 lbs 12 oz. and 21 inches long he was named Jeffrey Paul Aluyen. The parents, along with big brother Ryan Aluyen couldn't be more ecstatic as the family of four was now complete. Jeffrey spent his infant years in Kalihi, Hawaii. In 1993 , the family moved to Ewa Beach which back then was a small, but growing town in Oahu. Jeffrey attended St. Theresa in Kalihi, Hawaii from Kindergarten to 8th Grade. There, he attained excellence in scholastic achievements, and also discovered his passion for the game of basketball. Jeffrey went on to Damien Memorial High School, at that time an all boys Catholic school. Remember that passion for basketball? Well, Jeffrey became the star shooting guard for his high school basketball team! He was the team captain on the bowling team, and even represented the school in the Hawaii State Tournament. Whether it was helping fellow peers with school assignments or sportsmanship on the sports field, Jeffrey lived the "Viriliter Age" motto. After high school, Jeffrey attended DeVry University in Phoenix, Arizona and received a Bachelor's of Science in Biomedical Engineering. After working for a couple years in Arizona, Jeffrey decided to make the move back home. Jeffrey spent the next few years working for Hawaii Pacific Health at Kapiolani Women's and Children's Hospital as a Biomedical Techinician. His ambition didn't stop there. In addition to working his 9-5 job, he became a small business owner. Jeffrey partnered up with two of his close friends and founded the clothing brand Akamind. With his talent and skills, he had big plans, and was bound to accomplish many things. Jeffrey grew up in a big knit family. With his mother having nine siblings and his father having seven, he was blessed with many loving uncles and aunties along with an endless amount of cousins. Jeffrey was very close to all his family members, but he was particularly close to his late Grandma Rita or "Grandma Ritz" as Jeffrey lovingly referred to her as. Jeffrey and his Grandma Ritz had a special bond. He would always talk about how important she was to him and she even had a big influence on his nickname J.P. She passed away nine months prior to Jeffrey's passing. To his uncles and aunties, Jeffrey was a kind, respectful young man, someone his other cousins could look up to. Jeffrey and his cousins shared many memories, a funny one being the times when he allowed them to cross dress him at family functions. Jeffrey had a way of making those around him happy with his sweet and genuine smile and infectious humor that will never be replaced. Jeffrey grew up having a big circle of friends. He was known to them as simply Jeff. He was a true 90's kid - sporting shiny silver teeth, boo-yah haircut, and baggy pants. Jeff breakdanced, watched reruns of "Saved by the Bell, and his AOL screen name was TheOneAndOnly76. The subwoofers from his Chevy S10 could be heard from blocks away. He liked his music real loud, bumping "Nothing Free" by Lil Jon featuring Oobie. Jeff enjoyed playing cards, especially Pepito, and was a San Francisco 49er faithful. Nobody could take or dish a joke better than he could. His swagger is unmatched. Jeff will always be remembered as a loyal and true friend. He will be missed by many. On June 24, 2020 Jeff complained of a headache after getting off of work. The headache turned out to be a celebral aneurysm. The Aluyen family lost their bright star and a beautiful, loving and humble soul that day. His untimely passing left a void that will never be filled. Jeffrey's legacy will live on and he will forever be in our hearts. ------------------------------------------------------------------------------------------------------- Tribute by Mom My beloved Jeffrey, from the momernt I first held you in my arms, you completed my life. You brought us so much joy, pride and hope that we could stay together for a long time. But we know now that God had another plan for you, son. The things we planned together as a family are now just memories of you. I will miss your love, your sweet smile and your handsome face. I will miss EVERYTHING about you because you were my other rock. When I felt your heartbeat for the last time, half of my being went with you, honey. Sweet dreams and rest in peace my sweet boy. I will see you in my dreams and later when God calls me to go home to be with you once again. Rest in Love......MOM

The family of Jeffrey Paul Aluyen created this Life Tributes page to make it easy to share your memories.