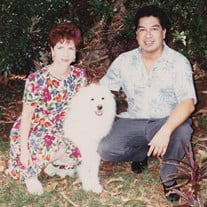 JoAnn was born in Chardon Ohio Feb 5, 1943. Her mother was Nellie Gower and her father Randolph Rummel. She had an older brother, Rudy Rummel. Her mother remarried and JoAnn found herself with 2 step brothers, Richard and Robert Denning. She was subsequently in an out of the Foster Care system but by age 15 her older brother Rudy brought her over to Hawaii. She went to Roosevelt HS but her senior year graduated from University HS. It was here she Married Joaquin Tenorio before entering University of Hawaii at Manoa,in Entomology. JoAnn and Joaquin both graduated then took postgraduate studies and finally both got Phd’s in Entomology from Manoa. They moved back to Micronesia, where Joaquin was from. They lived in Palau and Saipan for several years before moving back to Hawaii. They both worked at Bishop Museum. JoAnn would recall her travels with great pleasure, from post graduate drives across the US and Mexico, also including living in Micronesia. Now in Bishop Museum JoAnn wrote and published many professional essays and articles. She would eventually take the Journals Manager at Bishop Museum Press. While there she would remarry and co-author THE definitive Hawaiian insect books, “What Bit Me” and “What’s Bugging Me”. From Bishop Museum Press JoAnn went to University of Hawaii Press, first as Journals Manager but then as Book Production Manager. Somehow along the way, JoAnn would tame a feral computer professional and marry again for a third and last time. JoAnn had a long history of Medical conditions that would dampen her indomitable spirit. She once lamented that chronic pain steals who you are, you cannot be your true self living with chronic pain. She also lamented that fate deemed it necessary to afflict her with many different unrelated conditions. She often said, if there is a least likely set of conditions she will have it, if there is a most unusual combination of symptoms, then they would be hers. JoAnn would long to travel more but medical reasons prevented that. Despite her many layers of chronic pain, JoAnn still found the joy and vitality to show dogs and raise and train them. She loved her Westie and Cairn Terriers and even loved her new puppy Bichon Frise. While bedridden before passing, she said, how much she regrets not having the opportunity to train her new puppy LOKI, the Bichon Frise. It is not an exaggeration to say, her dogs were her children. JoAnn had a special way to approach her day, she never failed to greet you. She approached strangers with a hearty “Good Morning!” She never failed to find the humor in a situation and was prone to malapropisms. Not of the “Left handed compliment” sort but rather a funny mixture of combining addages or sayings. More than one person has attempted to compile her “JoAnn-isms”. JoAnn never failed to connect with people on a human level. She would confess her shyness to those closest to her. But to most other people, she would appear comfortable and competent socializing easily with both long time acquaintances and newly found friends. After 3 weeks suffering a mystery illness and series of new pains, JoAnn went on 3 ambulance trips to Emergency Rooms and they always failed to give a proper diagnosis. Once Admitted to Straub Medical Center, it took another week of tests, MRI’s and multiple consultations for a proper diagnosis. JoAnn had 3 fracture points on her spine causing Lumbar Sacral plexus inflammation with Sciatic and Pudendal nerve involvement. She had a broken back in layman terms. Treatment involved a complex and difficult surgery followed by an even more difficult recovery process. Ultimately Fentanyl was the only source of pain relief, and the source of her last breaths a week after surgery. She was the best of us. Stolen from us too soon. We all feel this loss deeply. There will be a memorial service for JoAnn on April 14, 2019 from 1pm to 4pm at the Windward Estates Community Recreation Center, 46-064 Emepela Place, Kaneohe HI, 96744

JoAnn was born in Chardon Ohio Feb 5, 1943. Her mother was Nellie Gower and her father Randolph Rummel. She had an older brother, Rudy Rummel. Her mother remarried and JoAnn found herself with 2 step brothers, Richard and Robert Denning. She... View Obituary & Service Information

The family of Jo Ann Marie Tenorio created this Life Tributes page to make it easy to share your memories.