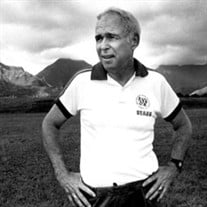 John Francis “Jack” Sullivan, Jr., son of the late Alice and John F. Sullivan, Sr., was born April 18th, 1934 in Boston, MA. He attended Boston English High School and Bentley College before relocating to Honolulu in 1957. He was married for 58 years to Mary Katherine Warner and they had four children: Colleen, Kevin, Kathleen, and Kiley. He is survived by his wife, children, five grandchildren, and sisters, Anne Sulllivan and Patty Lee. In over fifty years of community service, Jack was involved in sports, pollution control, traffic safety, and corrections. His greatest pleasures came from coaching youth and working in Hawaiʻi’s Correctional Facilities, helping to recognize the untapped potential of those populations since 1965. Jack was president of Hawaiʻi Business Service, Inc. for 46 years and was a real estate broker, as well. In 1974, he helped organize the Hawaiʻi chapter of the Associated Youth Soccer Organization (AYSO). He later went on to coach for Maryknoll High School, Pac-5, Hawaiʻi Youth Soccer Association (HYSA), Women’s Island Soccer Association (WISA), Bulls Soccer Club, Special Olympics, and teams within the youth corrections system. His influence was felt throughout the sport of soccer in the Hawaiian Islands, as Jack served on various boards and committees, wrote columns for local news outlets, served as an announcer for the Hawaiʻi High School Athletic Association at Aloha Stadium, and lobbied for the building of the Waipio Sports Complex. Additionally, he loved his long involvement with the Honolulu Quarterback Club, honoring local athletes. Over the years, Sullivan has been recognized in many ways for his leadership and devotion to others, including the First Lady Volunteer Service Award (1990), the Thomas Jefferson Award (1990 & 2006), induction into the Hawaiʻi Sports Hall of Fame (2004) and the National Soccer Hall of Fame (2007), as well as being selected to carry the Olympic flame in the torch relay for the 1996 Summer Olympics. He was affectionately known as “Uncle Jack” by many in the corrections community and “Mr. Soccer” by radio personalities when he called to give his weekly soccer updates. Jack was proud of his Boston Irish background and marched in the St. Patrick’s Day Parade as The Leprechaun for 40+ years. He was quick with a story, a smile, and a helping hand. His goal was to make a difference in the lives of others. He will be greatly missed. A celebration of his life will be held when we can safely gather to share memories, stories, and hugs. To be notified, please email [email protected]

The family of John "Jack" Francis Sullivan Jr. created this Life Tributes page to make it easy to share your memories.