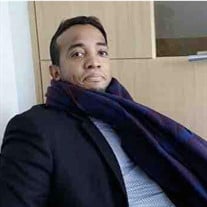 Johnathan was born to Tracy C Smith and Bruce A Pringle on 12/04/89 in FT. Sill Oklahoma. His birth was a special one. Weighting in at 8 Ibs 13 Ounces he was referred to as a miracle baby. During the birthing procedure it was said by his mother that he came out carrying her remaining tumors with him. Luckily he was not harmed by the cancer but unknowingly to him, he had cured his mother of cancer. Johnathan grew up along his siblings as a smart, tough and rambunctious child. Being the baby of the bunch, he was often spoiled by his grand parents and was often referred to as “Boobie.” John spent the remaining years of his adolescent growing up in Leavenworth Kansas, where he soon showed genius qualities throughout middle school and high school. He graduated from Leavenworth Senor High, but it was said he was a virtuoso in music, having mastered both the saxophone and violin. He then went on to master the Guitar, and teach himself South Korean Language before attending college. John was a gifted student and went on to obtain a Bachelors in East Asian Studies, International Economics & Language transferring from Emporia State University to the University of Kansas; and was also scouted by the FBI as a potential candidate. He instead chose to purse a Masters in Business Administration & International Finance at Chung Ang University in South Korea, and prior to his death was planning to purse a PHD in Linguistics and Language. Johnathan is also the 501st Brother of Kansas Epsilon Bond at Emporia State University. In his latter years, Johnathan also worked for a number of important organizations. Although he often kept his work life secret, he was an asset to his employers, and his talents and expertise will be greatly missed. He was a Junior Human Resource Analyst for Hyundai Engineering & Construction in Seoul South Korea, a Senior Analyst in Strategy and Business Development for the Chicago Korea Trade Center in Chicago IL and a Product Analyst for Google in Austin TX where he helped develop software which directly contributed to an internal COVID-19 task force. John ultimately was a loving free spirit who cared about and had many many friends. He had a huge heart, and gave to those who were in need. He often traveled the world towards the latter years of his live, spreading hope and joy to any and all that would listen and was a source of encouragement for a number of people. He was a brother, a friend, a lover and a son, and his impact on the small circle of people who grew to know and love him was monumental. He will be missed by many. In his memoirs John said this: “I believe my weakest point is my sympathy for others in positions more downtrodden than my own. Because of this I find if difficult not to give to those with less than me. This manifests itself on a daily basis where I find myself digging through my pockets in the subway to give to the beggars patrolling the exits and entrances we file through everyday. At first glance this would be something to be proud of and to broadcast to the masses. However, I often find myself victim to scams and emotional manipulation. My wallet has been emptied willingly weekend after weekend simply because I find it difficult to refuse their pleas for sustenance. This personality trait of my leaves me easily exposed to manipulation and for that reason I consider this my greatest weakness. It’s this same weakness, however, that leads me to greatness. Within corporate situations and disputes I've easily separated myself from unfair or hastily composed policies to stand with the average worker to voice our disapproval in one voice. It is this same characteristic that enabled me to spend hours of overtime work in my office ensuring the work schedules of employees and colleagues were composed fairly and in a timely manner. It is this characteristic I believe, that will lead me to greatness and enable me to become a great leader within the corporate world.“ John may not have made it to his full potential in this world, but we rest joyfully considering that he will finally rest at peace from the trials and troubles that plagued him on this earth. He most certainly had a dynamic impact on those around him, and for those who knew him, he will be dearly and sorrowfully missed. In his passing he is survived by his Mother Tracy Christine Smith, Step-Father Glenn Thomas Smith, Father Bruce Anthony Pringle, Sister Nichole Joan Francis Pringle (Nya) and Brother Carlos Raymond Pringle. Johnathan left no children of his own behind, but leaves behind four nephews Tracy, Kyree, Keygpt and Simeon whom he also loved.

Johnathan was born to Tracy C Smith and Bruce A Pringle on 12/04/89 in FT. Sill Oklahoma. His birth was a special one. Weighting in at 8 Ibs 13 Ounces he was referred to as a miracle baby. During the birthing procedure it was said by his mother... View Obituary & Service Information

The family of Johnathan Pringle created this Life Tributes page to make it easy to share your memories.