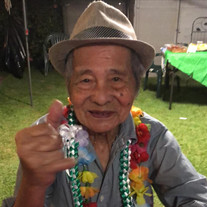 Juan Domingo Felipe Sr, 95, of Honolulu Hawaii has passed away at Pali Momi Medical Center in Aiea Hawaii on October 10, 2018. He was born to father, Eugenio Felipe and mother, Antonia (Domingo) in Banna, Ilocos Norte Philippine on January 27, 1923. He was a Veteran in the Philippines and served in the Armed Forces from 1945- 1946. Then married the love of his life, Placida, on April 20, 1949. He then raised a family on the Island of Hawaii where he retired as a Planter. Juan enjoyed life by being a devoted husband, loving father and best Tata to his grandchildren and great grandchildren. Being with his family is what he enjoyed best. He also enjoyed playing the guitar, reading his Bible and listening to Ilocano Music. During family gatherings, he enjoyed cooking Filipino Food and sharing his delicious meals. He would often spend his vacation in his homelands back in the Philippines. Although he was a quiet man, his heart was full of Love. Juan is survived by his wife, Placida Felipe; sons, Andres "Sherwin" Felipe, Elueterio (Vanessa) Felipe, Juan Jr. (Brenda) Felipe; daughters, Lydia Marcos, Elena (Eduardo) Butay, Rosviminda "Monie" (Arnold) Ramos; son in law, Prospero Arizo; 14 grandchildren, 15 great-grandchildren; preceded in death by daughter, Milagrina Arizo; brother, Monico Felipe; son-in-law Henry Marcos. Funeral services for Juan will be on Friday December 7, 2018 at Hawaiian Memorial Park Mortuary. Visitation from 5:30 - 9:00 pm with service to begin at 6:30 pm; Additional visitation will be the following morning of Saturday December 8, 2018 at St Philomena Catholic Church. Visitation at 9:00 am; Mass 10:00 am with a luncheon at the church till 12:15 pm. There will be a burial to follow at 1:00 pm at Valley of the Temples Memorial Park.

The family of Juan D. Felipe Sr created this Life Tributes page to make it easy to share your memories.

Juan Domingo Felipe Sr, 95, of Honolulu Hawaii has passed away...