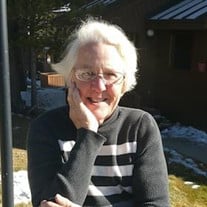 Kathryn Anne Hoffman passed away shortly after going to bed on Saturday January 18th, 2020 at age 76. Kathy was preceded in death by her father, Richard Edwards, her mother, Eunice Edwards and older sister Mary Joe. She is survived by her loving husband Robert ‘Terry’ Hoffman, two sons Doug and Scott, their wives Caroline and Harriet, five grandchildren Kaili, Noah, Matthew, Lucia, and Tom Hoffman, and younger sister Susan Edwards. Kathy was born in Lansing, Michigan. Many of her growing up years were spent in Long Beach, California. She traveled each summer to their family cabin on Badger Lake in Michigan which she owns with her sister Sue Edwards to this day. She met her husband, Terry, while attending the University of California at Berkeley. Kathy and Terry were married in September 1965 and lived in Huntington Beach, CA, and Cape Kennedy, FL before settling in Hawaii in 1966. Kathy and Terry started their family in Makaha while Terry worked at Lualualei. Their eldest son, Doug, was born in 1968 followed by their younger son Scott in 1971. The Hoffman family relocated to Kailua in the early seventies. Kathy was a devoted wife and mother, actively engaged in the community, the local school, and church. Kathy was a committed Christian who gave faithfully and trusted her salvation to her savior Jesus. She enjoyed spending time in Michigan, camping throughout the national park system and seeing family and friends. In 1978 Kathy returned to school, graduated with a degree in accounting and received the Elijah Watt Cells award for her performance on the CPA exam. As a Certified Public Accountant she worked at Deloitt Haskins and Cells, Amfac, Y Hata, and Trinity Christian School. Kathy loved to spend her time in yard gardening and in the kitchen where meals were cooked and grandchildren were spoiled. Many days were spent reading as she was an avid reader. Playing bridge with friends in Michigan and Hawaii was also a hobby she enjoyed. She treasured her many friends and relationships she created throughout her life. In recent years Kathy split her time between her residence in Kahalu’u, the cabin at Badger Lake and at her children’s homes in Richland, Washington and Breckenridge, Colorado. She was a dedicated and beloved ‘Nana’ who prioritized the relationships with her grandchildren and actively supported their interests. There will be a celebration of life at Trinity Church in Maunawili at 12:00 pm on Wednesday February 5th. The family would like to thank Kathy’s many family members, friends, neighbors, doctors and caregivers who have enriched their lives. In lieu of flowers, memorial contributions may be made to Trinity Center for World Mission, P.O. Box 580, Dahlonega, Georgia 30533: www.trinitycwm.org

Kathryn Anne Hoffman passed away shortly after going to bed on Saturday January 18th, 2020 at age 76. Kathy was preceded in death by her father, Richard Edwards, her mother, Eunice Edwards and older sister Mary Joe. She is survived by her... View Obituary & Service Information

The family of Kathryn Anne Hoffman created this Life Tributes page to make it easy to share your memories.

Kathryn Anne Hoffman passed away shortly after going to bed on...