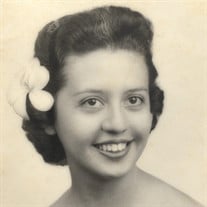 Leslie Joan (Lewis) San Diego entered into rest September 5, 2018 in Mesa, Arizona surrounded by family. Born on April 19, 1934 in Honolulu, Leslie is survived by her 3 sons, John Jr (Cecilia)-Tempe, AZ, Derek, Honolulu, HI and Scott (Holly)-Gilbert, AZ, 8 grandchildren, Jason (Christina) Kanoa, Andrew USCG and Jordan USAF San Diego, Mitsuko (Harrison) Crum, Bruce Kimura, Heather (Nathan) Whitmer, Eric (Clara) San Diego and Michael (Katherine) San Diego, 4 Great Grandchildren, Bryce (Andrew), Eliana (Jason), Cecilia Rose (Mitsuko) and Alice (Eric). Brother Sydney Paul (Charlotte) Lewis, Jr. lives in Hawaii. Leslie was preceded in death by her parents, brothers Gary and Donald and her husband John Sweeney San Diego, Sr. Graduating with a Bachelor of Arts degree at the University of Hawaii in 1956, Leslie entered the workforce with the Department of Education for the State of Hawaii as a Public-School Teacher. After teaching K-3rd grade at various elementary schools on Oahu and Maui she retired after 25 years of service. In 1992 Leslie and John moved to Arizona to be closer to the grandchildren and settled in Tempe, AZ. Leslie was very involved in her grandchildren’s lives. Whether it was orchestra/band concerts, track meets or footballs games, she and John made it a priority to attend all of their events. Leslie and John were devoted and active members of the Church of Jesus Christ of Latter-Day Saints. Married for 59 years, John lovingly cared for Leslie as she dealt with Scoliosis and other health issues eventually becoming wheelchair bound. In 2014, no longer able to be independent, Leslie and John were cared for by Scott and wife, Holly and eventually moved in with John Jr. and wife, Cece to be cared for at their home until her passing. Funeral services for Leslie will be held on Saturday, November 03, 2018 at Hawaiian Memorial Park Mortuary (45-425 Kamehameha Hwy. Kaneohe, Hi 96744) Visitation: Will begin at 9:00 am, with service to follow at 10:00 am. There will be a Burial to follow at 11:00 am at Valley of The Temples Memorial Park.

The family of Leslie San Diego created this Life Tributes page to make it easy to share your memories.