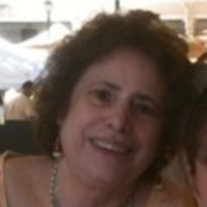 Celebrating the life of Loretta Jean Deliana Antone Fuddy, age 65, of Honolulu, Hawaii, passed away on Wednesday, December 11, 2013 in Hoolehua, Molokai. Loretta was born on April 12, 1948 in Honolulu, Hawaii to Lewis Paul Fuddy and Evelyn Mae Antone; she was the 2nd of three children. She attended St. Patrick's Elementary School, Sacred Hearts Academy, University of Hawaii and John Hopkin's University, where she earned her Master’s in Sociology, Social Work and a Master's in Public Health. After graduation she began a career as a Social Worker, Director of Maternal and Child Health. She was the Director of State of Hawaii Department of Health. She was also a member of St. Theresa’s Catholic Church, where she sang in the choir. Her most important events in her life were the confirmation of hearing the birth of her nieces, nephews, grandnieces and grandnephews. Some of her hobbies were the collections of various cat and angel figurines and taking care of her pet cat, Flint. She enjoyed listening to all types of music. Some of her special friends were Paula & Johnathan Wong, Julie Nowell and Jerry Pinell. Loretta is survived by her brother, Lewis P. Fuddy, Jr.; sisters, Cynthia Bunch and Lynette (Scotty) Schaefer; nieces, Brandi Fuddy, Wendy Roberts-Reed, Michelle Bains, Kimberlee Greer and Amanda Pilialoha McMillan; nephews, Robert Roberts, Jr. and Masi Schaefer; grandnieces, Christina Bains, Samantha Greer, Seraphina Lepage, Brittany Reed-Kumar, Kau'ionalani Hamakua-Felix, Lehiwa Hamakua-Schaefer and Anuenue Hamakua-Schaefer; grandnephews, Adron Xauder McMillan, Ethan Lepage and Isaiah Lepage. Her services will be held on Saturday, December 21, 2013 at the Co-Cathedral of St. Theresa. Visitation will be from 9:00-11:00 a.m., funeral Mass at 11:00 a.m. and a private burial. Family requests no flowers. In lieu of flowers, donations may be made to the March of Dimes and the Hawaiian Humane Society.

The family of Loretta Jean Fuddy created this Life Tributes page to make it easy to share your memories.