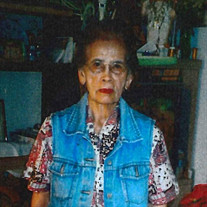 Lucia P. Itucas, 85, of Honolulu, passed away on Sunday, September 16, 2018. She was born to father Amado Perez and mother Mauricia Ofielda on February 16, 1933 in Murcia, Negros Occidental, Philippines. She was the 3rd oldest of 6 children. She attended Philippines vocational school. Lucia also earned a degree in cosmetology, and soon after graduation she began her career as a Beautician. On October 04, 1958 she married her loving husband Pablo T. Itucas at St. Michael Church, Makati, Philippines. The couple later moved here to Oahu and resided at 1001 N. School St. in Honolulu, Hawaii. Lucia was a very religious woman, in fact she was a member of St. Theresa Church and St. Michael Church, Philippines Catholic Women League and President Bagong Ina ng Bayan-Philippines. The most important person in her life was her husband Pablo t. Itucas, and the most important even in the couples lives was the day they celebrated their 50th anniversary in the Philippines. She was a loving, caring , generous, kind, and humble person. She had a passion for hair styling, dress making nail art and most of all attending church. Lucia's favorite song was Unchained Melody from the Righteous Brothers. She is survived by her children: Wenifredo P. Itucas, Jennie P. Itucas, Carina I. Itucas; Son-in-law: Fred A. Ramos; Grandsons: Jonathan Alfred G. Itucas, Carl Daniel I. Ramos and Carl David I. Ramos; Granddaughters: Charity Ruth G. Itucas and Abigail G. Itucas. Romans 8:28 "We know that in all things God works for the good of those who Love him, who have been called according to His purpose." Funeral services for Lucia P. Itucas will be held on Tuesday, October 23, 2018 at Hawaiian Memorial Park Mortuary. Visitation: 5:00 pm; Service: 6:00 pm.

Lucia P. Itucas, 85, of Honolulu, passed away on Sunday, September 16, 2018. She was born to father Amado Perez and mother Mauricia Ofielda on February 16, 1933 in Murcia, Negros Occidental, Philippines. She was the 3rd oldest of 6 children.... View Obituary & Service Information

The family of Lucia Perez Itucas created this Life Tributes page to make it easy to share your memories.

Lucia P. Itucas, 85, of Honolulu, passed away on Sunday, September...