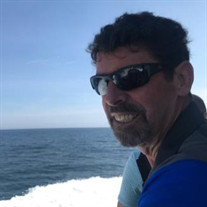 It is with great sadness to share the passing of Mark Remlinger. Hawaiian Memorial Park Mortuary is honored to be serving the Remlinger family. Mark moved to Hawaii in 1991 and vowed to stay here for the rest of his life. He was crafted in drywall, suspended ceilings, exterior plaster, framing and carpentry for over 40 years providing families and businesses with quality workmanship. He was a “numbers” guy and could calculate anything in an instant, especially measurements, which surely suited him for his craft. His math teacher actually failed him for not doing his calculations the typical way. He looked forward to his yearly trips back home to Manomet in Massachusetts to visit with mom and his growing family. Sometimes we were able to catch a baseball game but he really enjoyed stopping in Las Vegas on the way and back to break up the long flight. He was an avid sports fanatic of the New England Patriots, the Boston Red Sox and the Boston Celtics. He could talk sports with anyone and would keep with the current stats. He was especially proud of his younger brother Mike and loved watching him pitch. He says rooting for him vs the Red Sox was a no brainer. He also enjoyed watching the game of golf and often times would be switching between channels to watch men’s/women’s golf and the Red Sox’s game. He also shared that the letters in the word Golf meant… Gentlemen Only, Ladies Forbidden. If there was an opportunity to play a game of golf, he always loved to go. He enjoyed slow cooking chicken wings on the bar-B before a game on the weekends. He loved spending the weekend watching sports. Sometimes he would come home early from work just to catch the game LIVE on TV. We always had the ultimate sports package on DirecTV so he would have access to any game on whatever channel. Mark would always strike up a conversation with someone while he was in line where ever he was. He loved talking to people. He was good hearted - always allowing his friends a place to stay, without raising the rent. He always believed in karma. He had many hilarious and mischievous stories to tell of his adventures growing up and through his adulthood. He especially had fun sharing the story about how he played postman as a youngster and took everyone’s mail from their mailboxes in the neighborhood and redistributed them. He was also proud to be a grandfather and enjoyed the time he got to spend with Callum, and also excited to see pictures of newborn Ezra grow up throughout the months. After an 18-month battle, Mark William Remlinger, passed away peacefully at the age of 61, in Kaneohe, in the home he enjoyed renovating. His favorite color was blue, he named his Siamese cat Blue and chose to paint the house blue. He wanted this home with a pool so Maleko could practice swimming. Maleko loved swimming in the pool, sometimes till 10 or 11 o’clock at nite. Mark is survived by his life’s partner, Allison Goto; Daughter: Janelle Remlinger Sons: James Remlinger; Maleko Remlinger (pre-deceased 2017) Sister: Lynne Remlinger (Jake) Jacobs Brother: Michael (Tina) Remlinger; Keith Remlinger (pre-deceased) Stepsons: “Ricky” (Santy) Coulstring, Jesse Coulstring; Stepdaughter: Jocelyn (Derek) Thompson Grandsons: Callum Parsons, Ezra Remlinger, Scame Coulstring; Granddaughter: Jesselle Kamalei Coulstring Nieces, nephews and extended family Kitties: Tiger, Itsy and Minnie Thank you to everyone for being a part of his life! Love to you all – his humor and company will be missed tremendously! Memorial services will be held at a later time.

It is with great sadness to share the passing of Mark Remlinger. Hawaiian Memorial Park Mortuary is honored to be serving the Remlinger family. Mark moved to Hawaii in 1991 and vowed to stay here for the rest of his life. He was crafted in... View Obituary & Service Information

The family of Mark Remlinger created this Life Tributes page to make it easy to share your memories.

It is with great sadness to share the passing of Mark Remlinger....