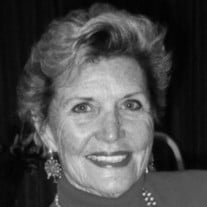 Mary Elizabeth Peden O’Connor passed away on September 28, 2019, surrounded by her loving children, grandchildren, great-grandchildren, and friends. She was 88 years old. Mary was born on August 20, 1931, at St. Joseph Hospital in Phoenix, Arizona. The daughter of Mary Kathryn Carson and Prosper Whitney Peden, she grew up alongside her three younger siblings, Sally, Whitney, and Don. In 1943, the family moved to California, where Mary attended Marlborough School in Los Angeles. She often roller-skated to campus, reading her homework assignments along the way. Mary attended Stanford University in Palo Alto, graduating with a B.A. in Education in 1953. This sparked her lifelong love of all things Stanford — go Cardinal! Upon graduation, Mary began her teaching career. One of her first jobs was in Washington, D.C., where she took up residence at the famous Halcyon House in Georgetown. In 1956, Mary received an offer to teach at Punahou School in Honolulu. Always up for an adventure, she packed her bags and moved to a small bungalow on Kahala Avenue. Mary taught 7th and 8th grade at Punahou, and often said this was her all-time favorite teaching experience. Soon after Mary’s arrival in Honolulu, a friend invited her to go swimming at the Outrigger Canoe Club. There, on the beach, she met a dashing young Naval Officer named Dennis O’Connor, and began a love affair that would last more than 60 years. Mary and Dennis married in August, 1958, and went on to raise four children in Honolulu. Mary actively supported her children and community through various volunteer roles, including President of the Punahou PTA and President of the Kapiolani Hospital Auxiliary. In 1981, Mary enrolled in the University of Hawaii’s Master's program, earning an M.A. in Political Science. Always an athlete, Mary enjoyed running, tennis, golf, and skiing. She was also a passionate reader and regularly shared her favorite books with family and friends. In her later years, she enjoyed daily walks along Kahala Beach and lifting weights. She was a regular at the Outrigger weight room on Tuesdays and Saturdays - probably one of the few 88-year-olds pumping iron at the club. Mary was a smart, strong, fiercely independent woman, with a keen sense of humor and an insatiable zest for life. She and Dennis had a wonderful life together - they traveled extensively, hosted frequent family gatherings, and joyfully celebrated every birthday, holiday, and graduation with their children, grand-children and great-grandchildren. Dennis passed away in April, 2018, four months before their 60th wedding anniversary. Mary is survived by her children, Dennis O’Connor Jr. (Louise Lucas), Kathleen O’Connor Lupo (John Lupo), Whitney O’Connor (Cherie Jardine O’Connor), Prosper O’Connor (Sheri Sato); her grandchildren, Auli’i Dudoit (Travis Dudoit), Kanoa O’Connor, Nalu O’Connor, Ellie Lupo, Clare Lupo, and Jon Gregory; her great-grandchildren, Paliku Dudoit and Ruth Mahie Dudoit; her brothers, Whitney Peden and Don Peden. Predeceased by beloved husband Dennis E. W. O’Connor and sister Sally Peden. A Memorial Service will be held on November 16, 2019 at Punahou Chapel (visitation at 2pm; service at 3pm). In lieu of flowers, donations can be made to Punahou School or The Villas at St. Francis.

Mary Elizabeth Peden O&#8217;Connor passed away on September 28, 2019, surrounded by her loving children, grandchildren, great-grandchildren, and friends. She was 88 years old. Mary was born on August 20, 1931, at St. Joseph Hospital in Phoenix,... View Obituary & Service Information

The family of Mary Elizabeth Peden O'connor created this Life Tributes page to make it easy to share your memories.