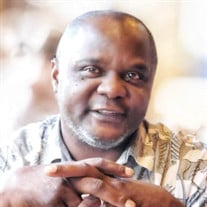 Michael Andrew Irvine, beloved husband of Christine Sorensen Irvine, passed away suddenly and unexpectedly on July 20,2021. Michael was born as Michael Veasley in Urbana, Illinois in the county of Champaign on April 24, 1964. He lived in an orphanage until his adoption on May 13, 1968, by his parents Andrew “Buddy” Vernord Irvine and Ada Nancy Wheeler Irvine. His adopted mother Ada passed away in January 1971. Mike’s father remarried in 1977 to Lucille Johnson. Michael grew up with a foster brother (Sidney Morgan) and many older stepsisters, stepbrothers, nieces, nephews, and cousins. He graduated from high school in Springfield, Illinois and attended college briefly at Lewis and Clark Community College before joining the United States Air Force in 1985 where he served as a law enforcement officer in Hawaii until 1990 and then served in the Air Force Reserves until November 1992. After leaving the military, he continued to live on the island of Oahu until his death. Michael married Theresa Petrula in 1987. Together they had three children, Colton (1989), Justin (1990), and Chelsea (1992). Theresa and Michael were later divorced. Michael attended Honolulu Community College and the University of Hawaii at Manoa to continue his studies in criminal justice. He held a variety of jobs on Oahu, working in car sales, as a mortgage loan officer, and operating his own mobile notary business. Michael met his second wife Christine Knupp Sorensen in December of 2009 at Jazz Minds in Honolulu, HI. They were married in Kaneohe, HI on May 11, 2013, moving to Aiea, HI in 2014 where they lived until his death. They shared a love of music, the ocean, and reading. They were both members of Trinity Missionary Baptist Church in Honolulu where Michael served as an usher, a grounds and facilities volunteer, and a trustee as well as participating in the Men’s Ministry. Michael is survived by his wife, Christine K. Sorensen Irvine of Aiea, HI, children Colton Irvine (Nguyen Vu Tran Tu) of Honolulu, HI, Justin Irvine of Rochelle Park, NJ, and Chelsea Irvine (Manny Quodala) of Ewa Beach, HI, step-children Kathryn (Daniel) Veyna of Houston, TX, Michael and Andrew Sorensen of Aiea, HI, step-grandchildren, Evelynn, Jacob, and Ava Veyna of Houston, TX, step-sisters Margaret Irvine of Springfield, IL, Evelyn (Bob) Wills of Carterville, IL, Barbara (Simeon) Miller of Alton, IL, Linda (Charles) Timms of Southfield, MI, step-brother Carlton Stacey of Centralia, IL, step-nieces, Rheba Haynes of Springfield, IL, Alicia (Ronald) Wallace of St. Louis, MO, Tanya (Gregory) Denton of Godfrey, IL, and Diedra (Gregory) McClenton of Godfrey, IL. He is survived by many additional step cousins, nieces, nephews, great nieces and nephews, and extended family and friends. Michael was preceded in death by his adoptive mother and father, Ada Irvine (1971) and Andrew Irvine (1996), as well as his stepmother Lucille Irvine (2007). There will be a Celebration of Life for Michael Irvine on Saturday, August 28, 2021, at 11:00 a.m. at Trinity Missionary Baptist Church, 3950 Paine Circle (P.O. Box 31182), Honolulu, HI 96820. The service will be webcast at http://tmbchawaii.org/live-stream/ or can be viewed live on the Trinity Missionary Baptist Facebook page at https://www.facebook.com/tmbchawaii/ His ashes will be scattered at sea in Kaneohe Bay on September 6, 2021 at noon. Monetary contributions can be sent via Zelle or PayPal to 815-751-3901 or [email protected]

Michael Andrew Irvine, beloved husband of Christine Sorensen Irvine, passed away suddenly and unexpectedly on July 20,2021. Michael was born as Michael Veasley in Urbana, Illinois in the county of Champaign on April 24, 1964. He lived in an... View Obituary & Service Information

The family of Michael Andrew Irvine created this Life Tributes page to make it easy to share your memories.