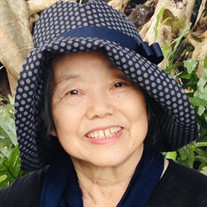 Mikiko Tanaka Honolulu, HI - Mikiko Tanaka, 81, passed away peacefully with her family by her side on January 13, 2022 at her home in Honolulu, Hawaii. Born in Shiga, Japan, Mikiko grew up in a large family of rice farmers. She was the first and the only one in the family to earn a college degree from Kyoto Women's University, at a time when higher education was seldom valued for women. She taught language and calligraphy in both high school and junior high school for 20 years. She married her junior high classmate and raised their two children while working. In 1986, Mikiko came to the United States where she taught Japanese at Saturday schools and calligraphy privately. Mikiko loved practicing and sharing Japanese traditions and culture through her art such as tea ceremony, flower arrangement, calligraphy, sumi-e painting and various crafts. At age 50, Mikiko learned pottery for the first time through an adult education class at the University of Akron, Ohio where she made a three-foot tall ceramic pot. She was immediately noticed by the teacher and was quickly encouraged to take a university-level pottery course. This was the beginning of her lifelong passion in ceramics, both as an artist, and as an advocate for spreading the Japanese culture in the U.S. She was often invited to demonstrate or teach at universities, museums, schools, and art centers. She was known to be extremely creative and resourceful, always reducing waste, reusing, recycling, and upcycling precious resources for her artwork. One year, Mikiko made 1,000 origami cranes from used wrapping papers and her calligraphy and sumi-e practice papers. Over the years, she has received numerous awards and recognition for her various artwork, and made many connections with fellow artists in the Tallahassee community, her home of almost 20 years. Mikiko was known for her leadership and speaking her mind especially in challenging or unjust situations. During the 1980s in Japan, she persuaded her employer to allow female teachers to continue working after marriage and after having children. She was also the first teacher to be granted a protected leave of absence for a full year to join her husband and family in the U.S. Though Mikiko did not remember her own mother who passed away at an early age, she was both a strong and nurturing mother who taught her two children that sitting down for meals together was the foundation of a family. Before passing, she shared that she was grateful she has lived a full life without any regrets. Mikiko will be fondly remembered by her devoted husband of 52 years, her daughter, her son-in-law, her son, her daughter-in-law, and her grandson. The Tanaka family expresses their heartfelt gratitude to the medical teams and caregivers at TPCA, UF Health Shands, Florida Cancer Center, The Queen's Medical Center, and Malama Ola Hospice, plus everyone who supported Mikiko and the family over the years and during her courageous battle with her illness. A small, private celebration of life will be held at a later date. In lieu of gifts, her family requests any memorial contributions be made in Mikiko's memory to American Cancer Society: Http://main.acsevents.org/goto/mikikotanaka There, please leave your favorite memory of Mikiko and how she may have touched your life as you have touched hers.

Mikiko Tanaka Honolulu, HI - Mikiko Tanaka, 81, passed away peacefully with her family by her side on January 13, 2022 at her home in Honolulu, Hawaii. Born in Shiga, Japan, Mikiko grew up in a large family of rice farmers. She was the first... View Obituary & Service Information

The family of Mikiko Tanaka created this Life Tributes page to make it easy to share your memories.