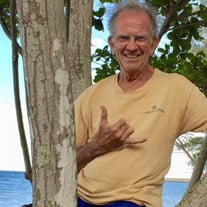 Morris Gordon (Mori) Beddoes, 80, Hau’ula, HI, passed away Saturday, April 25, after a lengthy battle with Alzheimer’s. Born in Independence, Iowa, Mori moved to the beautiful island of Oahu in 1962 after graduating from the University of Colorado. He bought and sold numerous houses in town before settling in the country town of Hau’ula. He built his dream home on the mountainside, where he spent endless hours in his yard, enjoying the cool mauka rain showers and the beautiful blue ocean. Mori loved collecting unusual antiques, and he was a passionate old truck enthusiast. Although he wasn’t born on the islands, he was truly kama’aina at heart. Mori had a legendary career at Liberty House (later Macy’s) at the Windward Mall in Kaneohe. His family nicknamed him “The Mayor” because of his ability to befriend everyone he met. Whenever anyone from the mainland came for a visit, it was impossible to go anywhere without bumping into someone who knew (and loved) Mori. When he could no longer work due to the advancing stages of his Alzheimer’s, Macy’s customers missed him so much that they brought him back by special request - simply to walk around, chat, and make them smile - the things that came most naturally to him. Mori was preceded in death by his devoted sister M. Patricia (Pat) Hanson in 1999. He will be dearly missed by all who knew him, including his mainland family: niece Sharon Kane, her husband Rick and daughter Emily of New Jersey; nephew Michael Hanson and son Tyler, and nephew John Hanson of Florida; and nephew Christopher Hanson, who moved back to Hawaii to take care of Mori. He is also survived by his ohana on Oahu: Pat Rea; and Candace, and Cameron Beale, Kaneohe, who became Mori’s adopted family and who provided him with incredible love and care until the very end; and his entire work family at Macy’s, who brought such joy and light to Mori’s life. A Celebration of Life will be scheduled at a later date. An online memorial page can be viewed at Hawaiian Memorial Park Mortuary at Valley of the Temples. Aloha, a hui hou, dear Mori.

Morris Gordon (Mori) Beddoes, 80, Hau&#8217;ula, HI, passed away Saturday, April 25, after a lengthy battle with Alzheimer&#8217;s. Born in Independence, Iowa, Mori moved to the beautiful island of Oahu in 1962 after graduating from the University... View Obituary & Service Information

The family of Morris "Mori" Gordon Beddoes created this Life Tributes page to make it easy to share your memories.