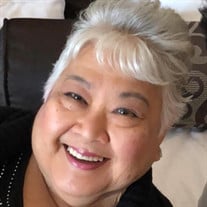 Nedita Hipolito Padilla, better known as “Nedy,” born in Manila on March 4, 1943, a truly beloved matriarch and treasured friend, passed on February 11, 2022. Nedy was gentle and exceptionally kind, yet possessed a quiet and graceful strength. As the third-eldest daughter in a family of twelve children, she was a natural caregiver and happily loved and nurtured her siblings. During World War II, she and her family fled the Japanese occupation in Manila. While their home was seized, Nedy’s resilience and tenderness became a source of comfort for her family. Nedy married her late husband, Benjamin Onoza Padilla, on January 31, 1969. They met while working at the Philippines National Bank and had two children together, Benny and Joanna. In 1976, they immigrated to Hawai’i, where she worked for a time in various positions before retiring and enjoying her life as a homemaker. She adored her grandchildren and helped raise them to be as kind and gentle as she was. Warm and compassionate, Nedy was beloved for her incredible sense of humor and giving heart. She was an outstanding woman and role-model, always putting her family and friends before herself. She had an infectious, colorful laugh and loved going to the movies, watching Korean dramas, cooking and eating with her family, and traveling. She rarely became angry and was always quick to forgive. She worked hard in everything that she did and gave all of herself without hesitation. In Nedy’s later life, she continued to pour out love, wisdom, and warmth onto her family and neighbors in her Ewa Beach community. Nedita Padilla was predeceased by her husband, Benjamin Onoza Padilla; her three brothers, Numeriano Jr., Nolan and Noly Hipolito; and her sister, Nenita Hipolito. On December 10, 2021, her older sister, Nelia Hipolito George, also passed and was memorialized at Valley of the Temples. She is survived by her siblings, Normit Calianta, Nelson Hipolito, Noida San Antonio, Norberto Hipolito, Nimfa Litonjua, and Nestor Hipolito; her son, Benny Padilla, and daughter, Joanna Padilla Anderson; her seven grandchildren and one great-granddaughter. Her memorial service will be held at Valley of the Temples on Tuesday March 29, 2022 at 10:30am. Visitation and service will be held at Trousdale Chapel. Burial to follow at 01:00pm.

The family of Nedita Padilla created this Life Tributes page to make it easy to share your memories.