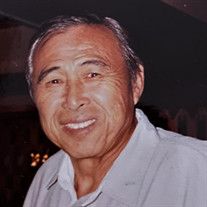 Nelson arrived on 10 July 1928, as the youngest of three children, born in the territory of Hawaii, to Lily and William (Bill) K.Y. Mau. The family lived with his paternal grandmother, “Ah Po,” in what was known as Damon Tract. Damon Tract was a wild tidal swamp area located near the ocean, and at the outer boundary of the Damon Estate. The family farmed, and grew pigs, chickens, rabbits; they fished, caught crabs, and clammed in the pristine ocean waters. In contrast to his serious big brother (Allan) and kind, quiet sister (Vivian), Nelson was a rascal and very mischievous. One day, he went crawling through the grasses while his father was cutting Honohono grass (to feed the pigs); and he was accidentally chopped in the head with the machete. Another time, while teasing and playing with an old Uncle, Nelson backed up right into a bucket of hot boiling water, scalding his backside. Tragedy hit Nelson at 3 years old, when his mother, Lily, became very ill and eventually succumbed to pneumonia. Thereafter, the family lived between Damon Tract, the country, and the city (Kalihi-Palama) where Ah Po bought land and built a home. Country life came to a halt when on December 7, 1941, with the Japanese attack on Oahu. Nelson was 13 years old at the time and the US military commandeered large chunks of land for wartime use. Nelson graduated from Farrington High School in 1946, but in the interim, Farrington High School, would serve the US Army as a hospital for the wounded, and students would be portioned into portables around the school’s campus. After graduation, Nelson worked in an auto shop, as a mechanic, somewhere in the city of Honolulu. As the story goes, whenever Nelson saw a great pair of legs walking by, he would whistle at them while working under a car. Soon, one of those “great pairs of legs” started bringing in sandwiches (peanut butter and bananas), and the rest is history. Nelson and Eleanor officially announce their engagement before Nelson left for the Korean War (US. Army). He returned in February of 1952, and they were married the following October at the First Chinese Church of Christ. They honeymooned at Kilauea Military Camp, on the Big Island of Hawaii. Nelson was a devoted and loyal husband to Eleanor. This year, they would have celebrated 70 years of marriage. Nelson received the following medals for the Korean War: Korean Service Medal w/2Bronze Service Stars, UN Service Medal, Meritorious Unit Commendation. He would be officially discharged from the US. Army in November (immediately after the wedding), but re-entered the service soon after, with the Hawaii Army National Guard on a full-time status. Nelson retired with over 20 years of service at the rank of Master Sargent with the majority of his career focused on the Nike Missile Project based in Kahuku, on the island of Oahu. In retirement, Nelson stepped up his pace to travel around the world. He organized trips on the mainland for family and gathered both family and friends for cruising opportunities worldwide. He became an avid gardener and tennis player, joined an informal group of tennis players that called themselves the Early Risers Ke’ehi Lagoon Tennis Gang. They would meet in the wee hours of the morning before most anyone awoke for the day. Imagine Nelson, with his older brother Allan, walking out onto the tennis courts on Ke’ehi Lagoon, it is pre-dawn and looking out to what was once the fringe of the Damon Estate, known to locals as Damon Tract. His family was important to Nelson. He was steadfast, honorable, a hard worker, and dependable. These traits he modeled and attempted to pass down to his children, Pamela and Daryl. Eleanor and Nelson would host large family gatherings in their home, he built the home with family gatherings in mind. He often helped with the care of grandchildren. Nelson loved to garden, and he was a collector of a great many things. But it was his curiosity, that was his finest trait. He loved to learn, if he saw something that piqued his interest, he would attempt to copy it. He loved to wander a city on foot. He listened to Rush Limbaugh on the radio and big band sounds on his I-pod. Nelson loved engaging with little children. In their presence, you could see the child within him, come alive. We will miss that big bright smile of his. He was not a man of many words, but when he did speak, it was well noted. Nelson passed away at his home on February 1, 2022, he was 93 years of age. He is survived by his wife, Eleanor Mau, a daughter Pamela Rehder, his son Daryl (Sandy) Mau. His siblings: Wallace Mau, Elaine Kishaba (Steve Mora), Donald (Edwina) Snyder, and Stanley (Queenie) Snyder. His five grandchildren: Brittney (Kyle) Chong, Mele (Skyler) Brown, Holly Jill (Meliza) Zablan, Joshua Rehder, and Lindsey Mau, seven great-grandchildren and numerous nephews and nieces. Funeral service will be on Monday March 28, 2022, at Valley of the Temples Trousdale Chapel. Service will be given at 10:45am with a burial to follow at 12pm at Valley of the Temples Memorial Park.

Nelson arrived on 10 July 1928, as the youngest of three children, born in the territory of Hawaii, to Lily and William (Bill) K.Y. Mau. The family lived with his paternal grandmother, &#8220;Ah Po,&#8221; in what was known as Damon Tract. Damon... View Obituary & Service Information

The family of Nelson Y.S. Mau created this Life Tributes page to make it easy to share your memories.