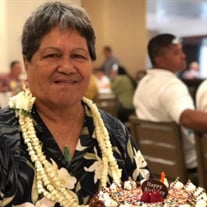 Nyna Napua Nee, 72, of Waimanalo, Hawai‘i passed away on Saturday, June 20, 2020. Born on November 29, 1947 in Honolulu, T.H. She was the fourth child born to Joseph Ale Nee, Sr. and May Lokelani Kalama. Nyna was a mother not only to her own children but also to her nephews and nieces who at one time or another lived with her or spent a lot of time with her. Nyna was the best cook; she cooked all her dishes mainly from scratch. During family gatherings and holidays everyone looked forward to all the ono dishes that she would bring to the table along with everyone else’s dish. Things she was known from were; fresh baked cornbread, banana bread, stuffing, turkey gravy (in which she always had to make a full pot because everyone would rush to make sure they had their share, if not MORE!), mac salad, and her infamous Lilikoi Butter to name a few. On top of being the best cook, Nyna was a master crochet artist and she often gifted family and friends her creations of blankets, doilies, blouses, hot plates, and whatever she could whip up with her needle and yarn. She was a member of the Red Hat Society and whenever she attended gatherings she would dress in their known colors of red and purple with their stylish hats. Nyna enjoyed traveling, such places she ventured to were; Michigan, Philadelphia, Virginia, DC, Mexico, Rio Grande, and her favorite place that she frequented often was the “9th island of Las Vegas where she enjoyed gambling and recreational fun. Nyna is survived by her son; Jamison Nee, daughters; Angela (Vinnie) Castillo, Leona (Jake) Taylor of Michigan; granddaughter Malia Jean Taylor “who truly was the twinkle in her eyes and the reason why she smiled”; brother; Joseph Ale (Charmaine) Nee, Jr., sister; Charlotte Leimomi (David) Delano of Virginia; nephews; Nathan Nee, Aaron Nee, Frank Hinds; Jon Hinds, Kainali‘i Nee, Kalani Johnson, nieces; Kapiolani Nee, Chandra Thomas, Kanoe Paulino, Nylee Pi‘ilani, Jenna Kaopuiki; preceded in death by parents; Joseph and May Nee, Sr., sisters; Mary Ann Leialoha Nee, Betty Mae Johnson, nephew; Kaimiola Nee. A celebration of Life for Nyna will be held at a later date.

The family of Nyna Napua Nee created this Life Tributes page to make it easy to share your memories.

Nyna Napua Nee, 72, of Waimanalo, Hawai‘i passed away on Saturday,...