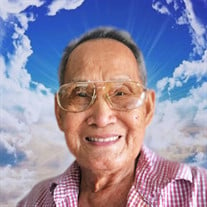 It is with great sadness to share the passing of Pantaleon Pagdilao. Hawaiian Memorial Park Mortuary is honored to be serving the Pagdilao family. Pantaleon Bactad Pagdilao at 88, passed peacefully with the sunrise on October 15, 2021. He was held in the arms of his family at Pali Momi Medical Center. Pantaleon, “Leon” was born on July 9, 1933 in Badoc, Ilocos Norte, Philippines to the late Sixto and Dominga Bactad Pagdilao. In the Philippine province, he was raised to be a farmer and bustled fields of rice, shallots, and tobacco. He was a skilled and hardworking man that was recognized by many. Leon married the love of his life, Adelina Layugan and were blessed with eight beautiful children. Their family’s journey led them to the United States, where they settled in the heart of the island of Oahu. Leon worked at Holiday Mart and retired as a dishwasher at Fishmonger’s. He soon took position as the neighborhood’s friendliest gardener, handyman, and his most favorite job “Tata” Leon. He is famous for guiding his grandchildren to and from their elementary school, tricycling his grandchildren and great-grandchildren, and gardener of fresh Filipino veggies and tropical fruits he’d share even to strangers. Anyone could spot him walking in a plaid shirt and his Laker’s hat, especially to Pearlridge Kam Swap Meet to purchase second-hand items for all his projects. Leon was everyone’s everyday “hello, how are you, and thank you”. His loveable personality made him well-known. Leon’s smile and laugh illuminated his prosperous life and with every breath, he triumphed through this journey. He is reunited with his siblings, the late Isabel Pagdilao Dahilig, Angel Bactad Pagdilao, and Costancio Bactad Pagdilao. And his two sons, the late Irineo Bactad Pagdilao and Jose Bactad Pagdilao. He is survived by his Wife: Adelina Layugan Pagdilao; Sister: Andrea Pagdilao Dela Cruz Children: Delia (Rodrigo) Kay, Jerry (Miriam) Pagdilao, Tessie (Mamati) Cadag, Leodeline (Eustaquio) Aganon, Ligaya (Melchor) Pascua, Tayme (Janet) Pagdilao 14 Grandchildren and 12 Great-grandchildren. Farewell service will be held on November 27, 2021. In respects of Hawaii State restrictions, we will be following the Covid guidelines. Farewell service will also be accessible Livestream.

It is with great sadness to share the passing of Pantaleon Pagdilao. Hawaiian Memorial Park Mortuary is honored to be serving the Pagdilao family. Pantaleon Bactad Pagdilao at 88, passed peacefully with the sunrise on October 15, 2021. He... View Obituary & Service Information

The family of Pantaleon Pagdilao created this Life Tributes page to make it easy to share your memories.

It is with great sadness to share the passing of Pantaleon Pagdilao....