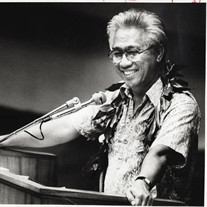 Richard “Dickie” Sung Hong Wong was born in Honolulu, Hawai’i on June 10, 1933 and was raised by his mother Jane C. Wong and extended family in a small neighborhood in Mo’ili’ili known as Bingham Tract. As a boy, he shined shoes in Chinatown and sold newspapers at the Honolulu Stadium to help pay for his private school tuition and, in his words, for “pin” money! He attended Saint Louis College Elementary and graduated from Maryknoll High School in 1953. He graduated from the University of Hawai’i in 1956 with a BA in Sociology. After graduation, he was employed as a clerk for the Hawai’i State Judiciary and later as a juvenile detention officer or “Uncle” at the State Detentions Home for Boys. In 1962, he was hired as a business agent for the United Public Workers Union where he honed his organizational talents and was encouraged to run for public office. He lost his first run for office but in1966 was elected to the Hawai’i State House of Representatives where he served for 8 years. In 1974 he was elected to the Hawai’i State Senate, and in 1979 was elected as its President, a position he held longer than any Hawai’i state senator before or since. He retired from public service in 1992 and was soon after honored with an appointment as Trustee for Kamehameha Schools Bishop Estate where he served until his resignation in 1999. Although he suffered with Alzheimer’s Dementia for over a decade, his final years were made comfortable with the kokua many loving and dedicated caregivers. For their kindness the family will remain forever grateful. Dickie passed away peacefully at home in Honolulu on May 20, 2022. A man much loved by his family and people who knew and worked with him, he is survived by his children, Kelly (Glenn) Brissette, Kevin (Marie) Wong, Keith (Michelle) Wong, Kristine (David) Gonsalves, Kristine (Keahi) Palaualelo and Kourtney Hi’ilani Wong; 13 grandchildren, 17 great-grandchildren; sisters, Amanda “Baby” DuPont and Kennedyne “Deenie” Sampaio; former wives, Sharane Wong and Mari Wong; nieces, nephews, cousins. He was preceded in death by sister, Anna Kwai Sim Ordenstein and daughter Kathleen Wong. Services will be held on Friday, July 1, 2022, at Valley of the Temples Mortuary. Visitation 5:00 p.m.; Memorial service 6:00 p.m. with a reception to follow. In lieu of flowers, donations may be made in his name to Palama Settlement.

The family of Richard "Dickie" Sung Hung Wong created this Life Tributes page to make it easy to share your memories.