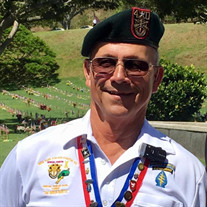 It is with great sadness to share the passing of Robert Novite Silva. Hawaiian Memorial Park Mortuary is honored to be serving the Silva family. Robert Novite Silva (Bob/Bobby/Lopaka), SGM (Ret.), US Army Special Forces and resident of Kaneohe, HI, passed away unexpectedly on August 14, 2021, at the age of 84. Bobby Silva is survived by his beloved wife, Jettie Silva, his three daughters; Alice Yasumura; Teresa (Nate) Ubando; and Jettie (Chris) Silva-Chojnowski, daughter-in-law; Thelma Silva, 6 grandchildren and 3 great-grandchildren. He is predeceased by his son, Robert Novite Silva Jr., grandson, Logan Silva and parents Louis and Alice Silva. Bobby was born in Wailuku, Maui, Hawaii in April 1937 where he attended Wailuku Hongwanji Japanese School for kindergarten and St. Anthony's from 1st to 12th grade. As A junior he joined the National Guard and upon graduation left to join the Army. He married the love of his life, Jettie M. Silva in June 1958 and recently celebrated their 63rd wedding anniversary! Bobby had a successful 28 year active duty Army career including most of that time as a distinguished Green Beret in 77th, 7th, 5th and 10th Special Forces groups with two tours in Vietnam. His basic training in Ft. Ord, CA was the 1st all Hawaii Company. Upon retirement from the Army, he continued his stellar career with 28 years with the DOE, twenty-one years as a JROTC Army Instructor at Farrington High School and seven years as the Hawaii JROTC SGM at the state level. In his retirement he was very active in the community. He was a member of the Special Forces Association Chapter VIII where he created and distributed monthly newsletters, coordinated the SF Association awards for JROTC award ceremonies and presented the awards at various ceremonies throughout the state. He served on the Army Retiree Council of Hawaii & was the SF Assoc. Rep for the Oahu Veteran's Council. Bobby was a devoted Husband, Dad and Papa. He was a spiritual man that was secure in his relationship with the Lord! He made a positive impact on generations of teenagers and anyone who met him was better from the experience. Due to COVID, private services will be held at a future date.

It is with great sadness to share the passing of Robert Novite Silva. Hawaiian Memorial Park Mortuary is honored to be serving the Silva family. Robert Novite Silva (Bob/Bobby/Lopaka), SGM (Ret.), US Army Special Forces and resident of Kaneohe,... View Obituary & Service Information

The family of Robert Novite Silva created this Life Tributes page to make it easy to share your memories.

It is with great sadness to share the passing of Robert Novite...