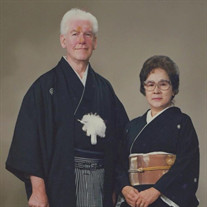 With courage and conviction, Robert Lee Smith set his soul free on May 14, 2021, to reunite with the love of his life, Yuriko Naito. Born in Tennessee and raised in Kentucky, Bob (as he was known) joined the Air Force at 17 determined to see the world. Besides being stationed in England and Germany, he also lived in Taiwan; a country that enchanted him. In fact, he was so drawn to Taiwanese culture he swore he’d been Chinese in a previous life. As an electrical mechanic, Bob worked on airplanes and taught classes to his fellow servicemen. Eventually, he retired as a master sergeant. In 1979, Bob married Yuriko. It was a late marriage for both, yet the next 33 years would prove to be the best of their lives. While living in Tacoma Washington, they enjoyed their suburban home along with numerous dogs; Lulu, Shogun, Princess and Bob’s favorite—little Muffin. The couple also loved the outdoors; gardening, boating, fishing, clam digging, hunting for geoduck, mushroom and blackberry picking, and camping in their RV. Yuriko was a painter, a poet, a traditional Japanese dancer, and an amazing cook and seamstress. And, Bob relished his role as her retainer; accompanying her to events where she sold her artwork or performed her haiku or dances. In turn, Yuriko gifted Bob with delicious home-cooked meals and clothing she sewed for him—even creating matching outfits at times. Bob's most treasured memory was their 1994 trip to Japan to visit Yuriko's relatives. Shortly after Bob lost Yuriko in 2012, his stepdaughter Yayoi moved him to Hawai’i where she managed his care. In Honolulu, Bob lived at Hawai’i Kai Retirement where, in spite of his introversion, he made a plethora of friends. Chief among them was Cheri who dressed him up every Halloween, ensuring that he won the best costume contest four years in a row. A well-read, prolific writer, Bob loved history, metaphysics, philosophy and exploring world religions. During their time in Washington, Bob and Yayoi regularly watched the NHK TV taiga drama series featuring Japan’s Sengoku (Warring States) Period. The weekly shows featured clan warlords, shoguns, regents and nobility. Afterwards, Bob and Yayoi would search the internet for more information about the various historical figures and compare notes. A keen observer of human behavior, Bob loved documentaries and executive produced the award-winning film series "War Brides of Japan, a docu*memory". He also appeared in DeYoung Zhou’s short film "Robert Lee Smith” available on Youtube: https://www.youtube.com/watch?v=2uzXXH1knQ4 As the sun began setting on Bob following his 90th birthday, he reflected that he had lived a good life. With an open mind, he shared that he was ready for his next journey beyond the earth’s realm. Besides his stepdaughter, Yayoi, Bob leaves behind her sister, Beverly in Washington; his younger brother Freddie and wife Nancy, and niece Carol in Texas; and, a host of acquaintances and amigos he was fortunate to have met along his life's path. A hui hou, Bob! Aloha nui loa!

With courage and conviction, Robert Lee Smith set his soul free on May 14, 2021, to reunite with the love of his life, Yuriko Naito. Born in Tennessee and raised in Kentucky, Bob (as he was known) joined the Air Force at 17 determined to see... View Obituary & Service Information

The family of Robert Lee Smith created this Life Tributes page to make it easy to share your memories.