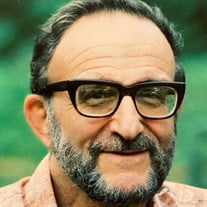 It is with great sadness to share the passing of Sheldon Jay Hershinow. Hawaiian Memorial Park Mortuary is honored to be serving the Hershinow family. Sheldon J. Hershinow proved strong and patient all his life, and so took a long fourteen years before surrendering to Parkinson’s at 78 on September 2, 2021, after thirteen months of hospice care at home in Kaneohe, Hawaii. He died with his wife and son at his side. Shel was a professor and administrator at Kapiolani Community College for over thirty years. His students and colleagues will remember how wisely he made space for their thinking instead of demanding the stage for himself. For twenty years he directed the Hawaii Writing Project, affording Hawaii’s teachers from kindergarten through college the opportunity to read, write and (in three-week intensive and transformative summer institutes) teach their way into fostering student-centered learning. Committed to the mission of professional development, Shel created and directed the Writing Across the Curriculum plus Critical Thinking (WAC+) Summer Institutes, serving all the colleges in the UH system across the islands and raising professionalism and morale for a great many. During years of leadership as Chair of the Humanities Department, Acting Assistant Dean and Acting Assistant to the Provost, his steadying judgment and kindness could be counted upon, and he rose to the challenge of collaborating in planning an art building for Kapiolani CC and redesigning the performing arts building. Shel suggested the inception of Ka Nani, his leading college’s award-winning student literary journal once he had created Kapiolani’s popular creative writing course. Shel became an inspiration for colleagues and an encouraging mentor for students. The teaching experience he most enjoyed was team-teaching with Colette Higgins, once his student in the 80s and later a popular history teacher. Their highly successful Learning Community lasted for eight semesters, integrating Colette’s Pacific Islands History with Shel’s Literature of Asia and the Pacific. Both teachers and their many grateful students gained enormously from joining forces. Shel is remembered by his remaining close relatives in Winnetka, Illinois as the best of brothers and cousins and a leading athlete. Born as middle son to the late Harry and Eva Hershinow on December 27, 1942, Shel enjoyed competing at softball, archery, water-skiing at summer camp and ice-skating in winter, but as he built muscle and good character he was best known for wrestling. Fiercely committed to mastery on the mat, he fasted through Thanksgiving for years to make weight, and earned standing at New Trier High sufficient for a scholarship to Oberlin and then his Master’s in English at the University of Chicago. Shel loved his tight group of friends who knew his family and kept connected through reunion gatherings across the states after he left Illinois (and the University of Illinois at Champaign-Urbana’s doctoral program in English Literature) to teach at the University of Hawaii. Here he completed his PhD on the American Jewish novel, and authored Bernard Malamud. He was a co-founder of the Sparks Matsunaga Peace Institute at UHM. The man who volunteered wrestling coaching at Iolani in his later years began his coaching at UHM and was valued whenever members of the English Department took to the sports field. Once freed from responding to student essays he hiked for hours, ran weekly up Tantalus and for years ran in Honolulu’s marathons. When Shel proposed marriage, he said “I hope it’s okay that I told a friend who has really severe chronic fatigue syndrome that if he ever couldn’t manage alone, he would always have a home with me.” He made good on his word, offering heavy nursing for eight years. Even after hip replacement prevented him from taking long paddles far out to sea in his kayak, Shel would end his full working day at KCC by roller-skating far away from the campus he served so well. And then he’d return, this man of balance and steel, without a single fall, to the family he was supporting with unfailing love and good humor. Shel is survived by his wife of 39 years, Lorna Hershinow; the daughter he raised from eight, Kim Evans LaRocca and her husband David LaRocca and their daughters Ruby and Star; his son David Hershinow and his wife Stephanie Hershinow and their children Harvey and Gilda; his brothers Lester Hershinow and Aaron Hershinow and his sister-in-law Sue Hershinow; his sister-in-law Gail Galanos and loving extended family in Chicago who have missed him for decades. Please contact Lorna at [email protected] or Dave at [email protected] if you would like to join in a zoom gathering on Sunday December 26 at four o’clock Hawaii time to talk-story about Shel on the day before he would have turned 79.

It is with great sadness to share the passing of Sheldon Jay Hershinow. Hawaiian Memorial Park Mortuary is honored to be serving the Hershinow family. Sheldon J. Hershinow proved strong and patient all his life, and so took a long fourteen... View Obituary & Service Information

The family of Sheldon Hershinow created this Life Tributes page to make it easy to share your memories.

It is with great sadness to share the passing of Sheldon Jay...