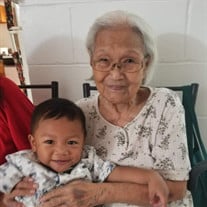 Soledad Retona Sanchez, daughter of Cayetano Retona and Presca Olaguer, was born on November 13,1927 in Guinobatan, Albay Province, Philippines. Her father was from Oas, Albay and her mother was from Guinobatan, Albay. Soledad had 4 sisters who are now deceased named Mising, Fermina, Lazara & Juanita. She also had 3 brothers, who are now deceased, named were Roberto, Domingo & Ildefonso. Our mother met her God-given soulmate, our father, Benjamin Bernal Sanchez Sr. at Intramuros, Manila. They were married and were blessed with 73 years & 6 months of fruitful marriage until our father passed away on Oahu, Hawaii in 2018. They had 7 children during their marriage: 4 girls named Lourdes, Elsa, Corazon, and Elena; and 3 boys named Benjamin Jr., Jose, and Arnel. In the Philippines, she opened & managed a small Carinderia Store in Cavite City next to Caridad Elementary School. This Carinderia Store helped us to get by financially while our father was away at sea working for months at a time. We were very fortunate that she always managed to provide all 7 of us with new clothes prior to the start of each school year from elementary up to high school. After a year of long contemplation, Soledad finally decided to put her fears aside in place of her children’s future and thought it was best for the family to relocate to Hawaii. In 1971 she immigrated to Hawaii and became a naturalized U.S. citizen years later. The first immigrated grandchild to Hawaii is Bernard Jose Sanchez. He could not pronounce Mama Soly when he was a little boy. So, Bernard called her Mama Oli instead. Later on, it became Mama for short and for the rest of the grandchildren, great grandchildren & others to follow. God blessed her with many talents that she generously used to serve others. She was an amazing cook in preparing and cooking Filipino Food. She cooked using her sense of judgement, taste, feelings, and without any measuring of the amount of ingredients that are required for small or large servings. The warmth of her love for family and her cooking brought us all closer together. She also excelled at being a seamstress, and eventually retired from Malia Fashion in Honolulu. She was a faithful servant of God, a loving wife, beloved mother, grandmother, great grandmother, great-great grandmother, and a sister in Christ to all. She and my father were such a devoted member of Island Baptist Church, attending for nearly 40 years together. They mostly attended all of their services, functions, and special occasions at Island Baptist Church. They only missed church when one of them was very sick. Island Baptist Church was their second home and family. To have our mother with us for 93 years & 1 month is a blessing from God. She had 13 grandchildren, 16 great grandchildren & 2 great-great grandchildren. On December 12, 2020 God called her home to be reunited with her loving and faithful husband Benjamin Sr., oldest daughter Lourdes, and oldest son Benjamin Jr. Sadly, shortly after Soledad was called home by God, our youngest brother Pastor Arnel Sanchez also passed away in California on December 24, 2020. They are all happily together in heaven now. Like the prayer warrior she was on earth, Mama will definitely continue to selflessly pray every morning in heaven for her family, friends, and anyone in need. Mama & Pastor Arnel, both of you will be greatly missed by everyone here. God has you now, but we carry you always in our hearts. We will always love you!

The family of Soledad Retona Samches created this Life Tributes page to make it easy to share your memories.