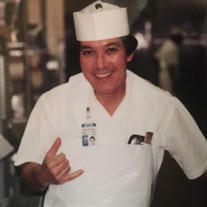 Theodore "Teddy" M. Encarnado, 81, passed away on Saturday, September 08, 2018. He was born in Santa Ana, Manila, Philippines on October 21, 1936. He was brought into this beautiful world by his parents Dominador Encarnado and Isabel Encarnado (Mercado). And of his 6 other siblings, Teddy was the second oldest. He earned his High school diploma, then went to school at Pasig Catholic College. Later he decided to join the military where he enlisted with the U.S Navy Department, serving from July 03, 1958 through December 05, 1977. After serving our great country for 20 years, he continued to work at Tripler Army Medical Center, where he worked as a Chef for the next 15 years. In between those years, he had the honor of marrying his beautiful, loving wife Milagros "Millie" Encarnado (Ibanez) on March 27, 1974. Teddy was a very busy, hardworking and dedicated man. He enjoyed working hard, especially when he was providing for his family. He was a great man and will be greatly missed by many who he served with, family and friends. Theodore "Teddy" M. Encarnado is survived by his Wife Milagros "Millie" Encarnado; Son: Ted (Margie) Encarnado Jr.; Daughter: Melissa (Duane Yoshioka) Ibanez; Sisters: Cosette Antonio and Milagros De Ocampo; Brothers: Romeo (Cora), Manuel (Judy) and Nestor (Fe) Mario deceased (Chit) Encarnado; Also 3 Grandchildren: Joshua, Samantha, and Ava. Services for Teddy will be held on Tuesday, October 09, 2018 at St. John Apostle & Evangelist Church. Visitation: 10:00 am; Service: 11:00 am, with lunch to follow; Burial: 2:00 pm at Hawaii State Veterans Cemetery.

Theodore "Teddy" M. Encarnado, 81, passed away on Saturday, September 08, 2018. He was born in Santa Ana, Manila, Philippines on October 21, 1936. He was brought into this beautiful world by his parents Dominador Encarnado and Isabel Encarnado... View Obituary & Service Information

The family of Theodore M. Encarnado created this Life Tributes page to make it easy to share your memories.