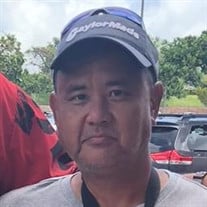 Timothy Jo Nakamura , age 52, passed away on November 22, 2018 at home at the D E Thompson Village, a caring community in Ewa Beach from natural causes. Born on January 28 , 1966 in Honolulu, HI . Timothy , Tim, Timmy , or aka “Gumby” , ( cause he was a gifted surfer) was Raised in Waipahu. Growing up he played little league , Raised Pigeons, entered surf meets , shaped his on surf boards, and was a sponsored surfer . Tim was a graduate of Waipahu Highschool class of 1984. Soon after graduating he met the mother of his children , Yolanda Jhere. After finishing his education, he joined the Union as a sheet metal worker (HSMW) . Tim’s hobbies included Vw Bugs, surfing, fishing, and golfing. ( he was known to have golfing fever ) For a time being His family resided in their first home in West Loch Fairways. Tim was also a handyman, resourceful , and was skilled with computers , and electronics. Tim treasured his Grandchildren; he was a devoted & proud Dad & Grandpa, and he often spent his free time with them. Despite the hardships that Tim had faced in his past, he overcame them and changed his life around for the better, and did it for his family . He was strong, and a survivor for doing so. Tim’s "Mr. Aloha Personality," jokester ways, his laughter, kind deeds , helpful nature, and cruise vibes will be cherished. Gone to soon, he will be greatly missed and loved by many. Tim was predeceased by his Dear Father, Shizuo, who past just a week before him , and his beloved sister, Julie. Tim is survived by his Mother, Kazuko; Brother, Steven; children, Chanyle, Chaz; their mother, Jhere; son-in-law, Jonathan; grandchildren, Rooke, Kara, and Saydi. Memorial service will be held on Thursday, December 6, 2018 @ Waipahu Hongwanji; visitation 4pm, service @ 5pm.

The family of Timothy "Tim" Jo Nakamura created this Life Tributes page to make it easy to share your memories.