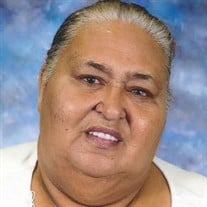 Velma Annamarie Rapoza, 61, of Kaneohe died on Saturday, January 12, 2019, in Honolulu, HI. She was born in Honolulu, Hawaii to Herbert Rapoza and Rose Oneha. Her companion of many years was Vincent A. Carias. She is survived by son, Gordon... View Obituary & Service Information

The family of Velma Annamarie Rapoza created this Life Tributes page to make it easy to share your memories.