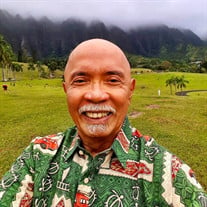 After a brief illness, Venerando Villapando passed away in his sleep on March 12, 2020. He was 73 years old. Venny, as he was known to his family and friends, immigrated to New York in 1970 from the Philippines with his then wife, Thelma King. Venny graduated from the University of the Philippines with a degree in Journalism. In New York, he put this degree to use by working in the News Department of the United Nations. In the 1990s, Venny moved to Hawaii where he and his second wife, Jessica Ordona, started their company, V.V. Visions. They produced a local TV show called Filipino Beat. The show focused on local Filipino culture and showcased talented Filipinos living in Hawaii. The show was a tremendous success, lasting for over 20 years. Venny was very active in the anti-martial law movement. He was a member of the Union of Democratic Pilipinos, and was a core member of Sining Bayan (People'sTheater), the cultural arm of the organization. Venny helped produce and acted in several plays that were staged in different cities in the United States and in Canada. Venny lived in Hawaii for the past 40 years. He and Jessica were active in the Catholic community and were parishioners of Our Lady of Peace Church, where they were also active volunteers in the church’s prison ministry. Jessica passed away in 2015, due to cancer. Venny was a talented musician. He played the trumpet, taught by his father Venancio Villapando, who was a big band leader in the Philippines. Venny is survived by his son from his first marriage, Norman Alan King Villapando, and his three grandchildren – Sienna, Simone and Noah. Venny had six siblings: Vicente (deceased), Virgilio, Veronica (deceased), Vernon, Verna, and Valerie. He will be remembered for his love of music, his sense of humor and his gift of making friends with everyone he met. He will be missed by all who knew and loved him. To ensure the health and safety of our community, we are following all guidelines set by local, state and CDC officials. If you are planning on attending a service, please contact the family in advance, so they can plan accordingly.

After a brief illness, Venerando Villapando passed away in his sleep on March 12, 2020. He was 73 years old. Venny, as he was known to his family and friends, immigrated to New York in 1970 from the Philippines with his then wife, Thelma King.... View Obituary & Service Information

The family of Venerando Espeleta Villapando created this Life Tributes page to make it easy to share your memories.

After a brief illness, Venerando Villapando passed away in his...