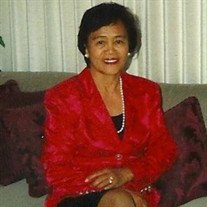 It is with extreme sadness that we announce the passing of Violeta Santos Guieb, age 90, of Kalihi, island of Oahu, Hawaii, on May 9, 2022. Her children, Roland and Carol, were by her side in Honolulu, when she went to heaven. Violeta was born on August 8, 1931 in San Nicolas, Ilocos Norte, Philippines, to Pedro Delos Santos and Martina Domingo Tabiolo, the fourth youngest of eight children. She attended a local school and helped her family provide a stable livelihood by working on their farm, planting rice and crops, with the help of their Carabao. There she grew up before moving to Hawaii at age 25. On April 25, 1955, Iglicerio Corpuz Guieb, a resident of Kailua, Oahu, at that time, went back to the Philippines to marry Violeta. A year later, she joined him in Kailua where they lived and had their first child. They later made Kalihi their home where the rest of the children were born. September 8, 1966 marked a significant event in her life when she became an official citizen of the USA. Violeta was a homemaker and dedicated her whole life to caring for her husband and raising her four children in a loving home. She loved many things, but her sole focus was on her family. Being surrounded by them made her the happiest. A very bubbly & sociable person, she made friends easily and was successful as a Sales Rep for Avon and Tupperware. She even had a short stint working as a Seamstress before deciding that her family needed her more. A woman of many talents, she was very musical (singing, dancing, playing the harmonica & keyboard) and creative (weaving blankets in P.I., sewing and cooking delicious foods that the family enjoyed). Equally, she was a devout Catholic as she was a fitness buff (a Richard Simmons and Gilad fan) and ran daily laps around Kalakaua park. She also loved anything related to music, enjoyed concerts, sports, beauty pageants, celebrity talk shows, music and award shows, reality shows (like the Bachelor and Bachelorette), soap operas, Filipino dramas and talent shows on TFC, flowers, pretty clothes, perfume, Infinite Aloe lotion, designer bags (that her sons bought for her) and traveling (to visit Josie and family in San Diego, and to Las Vegas to gamble). Violeta is survived by daughters, Josie (Leo) Macalino and Carol (Ross) Inouye; sons, Roland (Carol) Guieb and Robert (Theresa Espejo) Guieb, eight Grandchildren and seven Great-Grandchildren. She will join her husband, Iglicerio, her parents and her seven siblings in heaven. She will also be reunited with her son, Franklin, who went to be with the Lord at birth. On Thursday, June 23, 2022, there will be a viewing at 9:15 am at St. Anthony Church Kalihi at 640 Puuhale Rd, Honolulu, HI 96819, followed by a memorial service at 9:45 am. Her burial will be at 12:00 pm at Valley of the Temples Memorial Park, 47-200 Kahekili Hwy, Kaneohe, HI 96744 with lunch to follow. We would like to extend our deep gratitude to Ben and Tina Marquez, whom we consider family, to her former caregivers ~ Lydia Ramiscal Foster Care Home and her staff ~ Marilou Gasmen and Cherry Dumpit, to the staff of St. Francis Hospice and Nuuanu Hale Nursing Home and to all her previous caregivers for the wonderful care they provided to Violeta. We thank you from the bottom of our hearts!

It is with extreme sadness that we announce the passing of Violeta Santos Guieb, age 90, of Kalihi, island of Oahu, Hawaii, on May 9, 2022. Her children, Roland and Carol, were by her side in Honolulu, when she went to heaven. Violeta was... View Obituary & Service Information

The family of Violeta Santos Guieb created this Life Tributes page to make it easy to share your memories.

It is with extreme sadness that we announce the passing of Violeta...