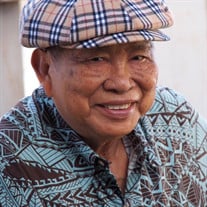 On December 10, 2019, in Honolulu, Hawaii, Virginio Labayog Rivera followed Jesus to his forever home surrounded by family. He passed in peace at the age of 86. He is preceded in death by his father, Ananias Rivera, mother, Apolinaria Labayog and his aunt, Marciana Labayog. Beloved husband of 48 years, Juanita Badua Rivera. Loving father of Judy (Arlen) Rivera Caraang and Ryan (Taryn) Badua Rivera. Proud grandfather of Blake & Braden Caraang, Cody Branco and Ryler Rivera. Dear brother of Nicolasa (Silvestre, deceased) Tolentino, Federico (Niceta, deceased) Rivera and Editha (Primitivo, deceased) Llacuna. Fondly remembered by cousins, nieces, nephews, other relatives and friends. Born in Laoag, Ilocos Norte, Philippines, Virginio was the oldest of 4 siblings. As a boy he lived mostly with his aunt helping with chores to support the family. As a very young man, he learned to work hard and to take on whatever jobs were available to support himself. He built bridges over rivers in Mindanao, was a photographer in Isabella and used his sewing machine to sew. He was an early entrepreneur opening a tailor shop in Manila. In 1968, his sister, Nicolasa gave him the opportunity to go to Hawaii. After 30 days of sailing the Pacific, Virginio arrived in Honolulu which became home for him. He achieved his American dream by becoming a United States citizen, creating a business, building a home, raising a family and generously giving back to the community that helped him. Virginio died just like he lived; he wrote his own rules, he fought authority and he paved his own way. And if you said he couldn’t do it, he would make sure he could. Virginio will be fondly remembered by family and friends for his smile, generosity, strength, integrity and courage. Memorial services will be held on Saturday, December 28, 2019 at 9:15 am at St. Anthony’s Church, 640 Puuhale Road, Honolulu, Hawaii 96819. Burial services at 2 pm at the Valley of the Temple, Eternal Love Garden.

On December 10, 2019, in Honolulu, Hawaii, Virginio Labayog Rivera followed Jesus to his forever home surrounded by family. He passed in peace at the age of 86. He is preceded in death by his father, Ananias Rivera, mother, Apolinaria Labayog... View Obituary & Service Information

The family of Virginio Labayog Rivera created this Life Tributes page to make it easy to share your memories.