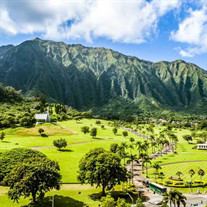 Vonda passed away peacefully on September 28, 2019, in her care home in Honolulu, Hawai’i. She was born on July 25, 1933, to Daniel and Jennie Sedgwick in Arco, Idaho. The 8 Sedgwick siblings, in order of birth, are: Pearl, Carl, Donald, Robert, Vonda, Rhea, Leon, and Joel. Her sister Rhea described Vonda growing up as “always a very nice girl, didn’t get into trouble, and smart - did well in school.” Vonda graduated from Butte High School with the class of 1951, served on a Mormon mission in England, and studied a few years of college. While an employee at an Idaho nuclear reactor, she vacationed with a girlfriend in Hawai’i, where she met local boy Donald Keli’i Kalama, in Waikiki. Vonda’s parents soon after visited Hawai’i to meet Donald, approving of him because, as they put it, “he’s a solid driver”. Donald would go on to have a successful 40-plus-year truck driving career. The two married January 30, 1965, and had two children: Donna and Kevin in 1966 and 1967, respectively. Vonda was, from the start, heavily influential in everything the Kalama family did – from pulling her children at an Olympic-level pace from Pawa’a Lane down Beretania Street to the Stake Tabernacle for church every Sunday, to her husband’s and children’s many, many, sporting activities. She strongly encouraged Donna to realize her exceptional scholastic talent, and she prayed for the best for Kevin. She was a musical inspiration - playing piano or organs for… everything; teaching piano lessons to many; playing clarinet; singing; and leading choirs at the Makiki, Kane’ohe, and Kahalu’u Wards. Her children, who at the time didn’t appreciate her talent or the cost savings, never took advantage of her piano lessons, but parlayed her musical genes into pretty good amateur saxophone and trombone careers. She loved living in Hawai’i and being a part of the extended Kalama family. She adored her brothers- and sisters-in-law and their families. She was so proud to be a part of the larger Kawahinekoa Ohana. While she was able, she actively participated in extended family events and was a strong supporter of the Native Hawaiian community. Vonda had an entrepreneurial spirit. Between stints at Kalu Glass and Adams Design, she ran her own secretarial company in the early eighties, called Secre-Tel Services, on the corner of Beretania and Kalakaua. She helped other small businesses with secretarial needs like bookkeeping, phone answering and messaging, letter preparation and mailing, and telexing/faxing. She was incredibly proud of her IBM Selectric (which she would often haul home at nights for homework), her bustling business, and the labor she put into it. Vonda is survived by her sister Rhea Radford of Ucon, Idaho; daughter Donna of Honolulu, Hawai’i; son Kevin of Portland, Oregon; and grandson Josh of Brooklyn, New York. The following services for Vonda will occur Wednesday, October 23, 2019: • Visitation: 10:00am to 10:30am • Service: 10:30am to 11:30am • Lunch and Visitation: 11:30am to 12:30pm • Burial: 1:00pm At Valley of the Temples, 47-200 Kahekili Hwy, Kane’ohe, Hawai’i, 96744.

Vonda passed away peacefully on September 28, 2019, in her care home in Honolulu, Hawai&#8217;i. She was born on July 25, 1933, to Daniel and Jennie Sedgwick in Arco, Idaho. The 8 Sedgwick siblings, in order of birth, are: Pearl, Carl, Donald,... View Obituary & Service Information

The family of Vonda Sedgwick Kalama created this Life Tributes page to make it easy to share your memories.