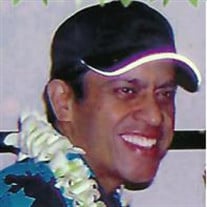 Kaohu passed away on January 30, 2022 at his home in Waikoloa, on the island of Hawaii. He was born in Harbor City, California on August 7, 1967. He is survived by his dad, Walter Kaohu Mookini Jr of Florida; mom and dad Evanitta 'Pinkie' and Randy Crowe of the Big Island, aunt Waldynne Mookini of Honolulu, Hanai Aunt Karla (Rick) Paiva, brother, Kala'i (Yolanda) Mookini (and family) of Florida; and o’hana throughout the states, Hawaii and Sweden. He was 'Uncle Kaohu to his many cousins, nieces, nephews and friends. He was predeceased by his grandparents Walter and Miriam (Hurley) Mookini Sr. and William Edmund and Evangeline (Ellis) Hiram, and Grandma Violini (Leota) Niko. Kaohu was blessed in being a part of a large, loving, blended family. Raised in Hauula, Japan and Honolulu, he attended Island Paradise and Bingham Tract Elementary graduating from the Kamehameha Schools - Class of '85 and continued his education at the University of Hawaii. Kaohu loved singing and listening to all sorts of genre. Music was in his DNA. He enjoyed listening to his grandpa Mookini’s Hawaiian Falsetto and Steel Guitar, following his mom and dad’s love of music and participating in family 'Kanikapila'. As a youngster, he learned all the words and music to the oldies from his 14 aunties and uncles. He also used his love of music and great voice as a Karaoke DJ. He was a ‘Movie Buff’ very passionate, knowledgeable and enthusiastic about all kinds of movies (especially Chinese, Japanese, galactic, ‘supahnatural’ and comedy). Kaohu was a 'warrior' in the true sense of the word. His family lineage of Mookini & Keaunui were rooted in service to Kamehameha I of Kohala, Hawaii. He was a proud Kamehameha Warrior, Class of '85 (following in the footsteps of his father ‘67, mother ‘66 and grandfather ’35) and served in the US Army. He was the ultimate gamer, playing with a team of international members both as an aggressive player and patient coach. Kaohu was a true advocate of basic human rights... helping and sharing his extensive knowledge and experiences with those less fortunate, the elderly and the disabled. One of his strengths was his ability to put others before himself and to make everyone around him feel special and loved. He was a lifelong member of The Church of Jesus Christ of Latter Day Saints. Due to the safety concerns of Covid, a Celebration of Life will be held on the Big Island in July and at the Valley of the Temples Memorial Park in Kaneohe on Saturday, August 6 at 10:00 am. And the Lord said, “Well done my son.”

Kaohu passed away on January 30, 2022 at his home in Waikoloa, on the island of Hawaii. He was born in Harbor City, California on August 7, 1967. He is survived by his dad, Walter Kaohu Mookini Jr of Florida; mom and dad Evanitta 'Pinkie' and... View Obituary & Service Information

The family of Walter Kaohu 'O Kaleponi Mookini III created this Life Tributes page to make it easy to share your memories.