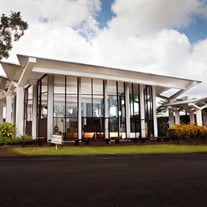 Walter Ray Rhoads, 70 of Kapolei, passed away on Wednesday October 31, 2018. He was born in beautiful Honolulu, Hawaii on May 12, 1948 to his parents Lawerence Rhoads and Natividad Labang. He completed his education at James B. Castle High... View Obituary & Service Information

The family of Walter R. Rhoads created this Life Tributes page to make it easy to share your memories.

Walter Ray Rhoads, 70 of Kapolei, passed away on Wednesday October...