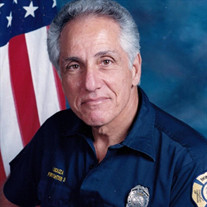 William Souza Jr., 78, of Kailua, Hawaii (a.k.a. Bill Souza) passed away on 07/18/2020 peacefully in his home. He was born to parents William Souza, Sr. and Violet Souza, on 09/28/1941 in Honolulu, Hawaii. He graduated from McKinley High School. Bill worked as a Fireman for 31 years. After 31 years of service, he retired from the Honolulu Fire Department on December 30, 2002 with the rank of Firefighter III. He was a perfectionist and a hard worker, taking pride in his work. He instilled that spirit of excellence in his children. He was known as a jokester, enjoyed talking story and making people laugh. He enjoyed golfing, lifting weights and doing woodwork. Bill is survived by Jamie Kong, daughter, Jimi Souza, daughter, Chris Souza, son, Kekuamakana Kobashigawa, daughter, Ke'ala Adolpho, daughter, Kala'i Ahlo-Souza, son, Ka'u’ilani Ahlo-Souza, daughter, 12 grandchildren, and 10 great-grandchildren. The family has entrusted Hawaiian Memorial Park Mortuary at Valley of the Temples Memorial Park with the arrangements. Mike Sposato will officiate the ceremony.

The family of William Souza Jr. created this Life Tributes page to make it easy to share your memories.