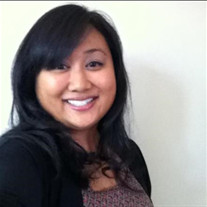 Wynette Barut Sheehan, 40, peacefully went home to our Savior, surrounded by her loving family and friends on Saturday, February 2, 2019 at Kaiser Moanalua Hospital. Born in Fort Leonard Wood, Missouri on March 19, 1978 to Romy and Madeline Barut. Home for Wynette and her family were Missouri, California, Germany, North Carolina and Hawaii, due to her father’s Army career. Wynette was a 1996 graduate of Wallace Rider Farrington High School. She attended Colorado State University, then moved to San Diego, California where she would meet her future husband, Harry Sheehan. They would settle back home to Hawaii and start their family and have two girls: Abigail Madeline (16) and Audrey Porsha (11).While she chose to stay home and raise her daughters, Wynette also found time to remain active in her daughters’ lives, she enrolled Abigail into the Girl Scouts of America, and both Abigail and Audrey into the Hawaiian Studies program at the Nu’uanu YMCA. She was determined to go back to school and successfully attained her Bachelors Degree from the University of Hawaii - West Oahu, in Public Health Administration. In addition to her parents, husband and two daughters, Wynette is survived by her brother, Rodel (Ronalyn) Barut with their children: Caelan, Ethan and Isabel, grandparents – Fortunato & Ofrecencia Pascua and Roman & Esmeralda Barut.

The family of Wynette Barut Sheehan created this Life Tributes page to make it easy to share your memories.