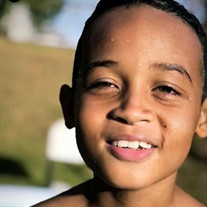 Zechariah Davis – Rodrigues was called home by our Heavenly Father on Sunday, April 11, 2021 in Richmond, VA. He joins his great-grandmother Esther Stone. Zechariah was born on July 30, 2011 in Honolulu, HI, to parents Ashlyn Rodrigues and Jerome Davis. In the 9 years that we were blessed to have him grace this Earth, Zechariah enjoyed playing video games with his cousins and brothers , and doing anything outdoors. He loved catching lizards and frogs, going to the beach, fishing, boxing and eating Vienna sausage with spoonfuls of ketchup. He was a delight to anyone who met him and touched the lives of so many in his short time here on Earth. Zechariah was the epitome of strength, bravery, and courage. In addition to his parents, Zechariah is now an angel to his sister, Analia Jones. His brothers Isaiah Sullivan, Jerome Davis Jr. , Azariah Davis, and Hezekiah Davis. Grandparents James Stone, Sonia Sugai, Deborah and Charlie Davis. His Aunts, uncles, and cousins. Until such time that we are able to join Zechariah in glory again, he would want us all to catch lizards and frogs. Be silly, happy and free. Root for the Steelers with his Papa, and the Buccaneers with his dad, and eat all the Panda Express (bear food) that our stomachs would allow us. This is not our goodbye, but our “see you later”. Zechariah, your God-sent purpose on earth has been completed. Job well done. What a reunion in Heaven it’ll be when we all earn our wings and meet again. Limited attendance services to be held on May 8th at Valley of the Temples Memorial Park from 11am to 1pm. Viewing from 12:30-1:30pm and Burial to follow at 2pm.

The family of Zechariah Davis-Rodrigues created this Life Tributes page to make it easy to share your memories.

Zechariah Davis – Rodrigues was called home by our Heavenly Father...