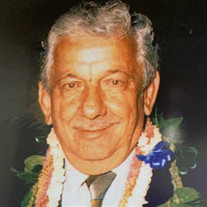 Alfred Benjamin Kameeiamoku (Sonny) Rodrigues passed away peacefully at his home in Kailua on February 24, 2019 at the age of 99. Born in Kapa’a, Kaua’I to Alfred B Rodrigues and Alice Mahoe Kahalemalihinikalei Harper, he graduated from Kaua’i High School where he played on the football, volleyball, basketball, baseball and swim teams. His lifelong passion for golf began in his teens when he began to caddy at the 9-hole golf course at Wailua. After graduating from Kaua’i High School he moved to Honolulu and worked at the Royal Hawaiian Hotel and also as a caddy at Ala Wa’i Golf Course. He joined the Navy Reserve at 17 and within a few years began his career as a storekeeper. He was called to active duty in 1940 and was on watch at Pearl Harbor when it was attacked on December 7, 1941. In June of 1943, he reported aboard the battleship USS Washington and served in the Pacific Theater until February of 1945. With 24 years of Navy service, he retired from the Regular Navy in 1964 as Chief Petty Officer. A few months later, he returned to federal service, this time with GSA where he served for 30 years. In recognition of his 54 years of exemplary federal service, the Federal Supply Center Annex was named after him on March 21, 1996. For 40 years he was a regular volunteer at the Hawaiian Open beginning with its first one in 1965 as a caddy. He was named their Volunteer of the Year in 2005. In 2002, he joined with a dedicated group of Pearl Harbor Survivors as a volunteer greeter and fund-raiser at the Pearl Harbor Memorial Visitor Center. His special joy was hosting the many Make-A-Wish visiting children through the museum and on the USS Arizona Memorial. He is survived by Alfred (Kammy) B. K. Rodrigues, Jr., Joseph (Jay) M. Rodrigues and Ronald J. Rodrigues – 3 sons from his first marriage to the former Ruth S. Kameda; Jimmy Brown, Fred Brown, Mary (Sister) Kane Pinker, Stella Brown, Kalani M. Rodrigiues and Aulani Schenck – 6 children from his marriage to Louise E. Brown; 9 grandchildren, and 3 great grandchildren. A Celebration of Life ceremony will be held on April 26 at 6 pm at the Pearl Harbor Memorial Visitor Center.

Alfred Benjamin Kameeiamoku (Sonny) Rodrigues passed away peacefully at his home in Kailua on February 24, 2019 at the age of 99. Born in Kapa&#8217;a, Kaua&#8217;I to Alfred B Rodrigues and Alice Mahoe Kahalemalihinikalei Harper, he graduated... View Obituary & Service Information

The family of Alfred Benjamin Kameeiamoku Rodrigues created this Life Tributes page to make it easy to share your memories.